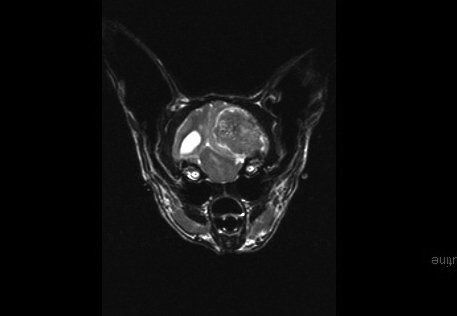 Your 10-year-old cat seems to be slowing down quite a bit. She no longer scampers happily from one end of your home to the other. She doesn’t spend much time playing with her toys, and she’s stopped hopping up onto your lap while you’re watching TV.

Instead, she’s begun devoting long stretches of time lying absolutely motionless in a corner, staring dreamily into space. At her age, such behavioral changes may simply be a normal consequence of her advancing years. However, it would be advisable to have your cat examined by your veterinarian, since the noticeable decline in activity could instead be signaling the presence of a brain tumor called a meningioma. If this is the case, the cat must be treated without delay or she may not have long to live.

According to Dominik Faissler, DVM, assistant professor of neurology and neurosurgery in the Department of Clinical Sciences at the Foster Hospital for Small Animals, a meningioma is a benign type of cancer that develops within the thin, protective membrane (meninges) that covers the brain and spinal cord.

Why they are so dangerous

These growths are especially dangerous because they develop in the tissue within the skull. “Since the skull is made of rigid bone,” he explains, “this tumor has only one way to grow — inward toward the brain.” Such growths are extremely rare in younger animals, occurring most commonly in elderly cats or those who are transitioning into old age.

The feline nervous system, like that of other mammals, is a complex network of electrical circuitry that enables all of an animal’s conscious and unconscious activity. The entire system comprises two components: the central nervous system, consisting of the brain and spinal cord; and the peripheral nervous system, which contains the cranial, spinal, and other nerves. In a healthy animal, these components work harmoniously to enable and control vital processes within a cat’s body and to allow the animal to manipulate and respond to her environment.

These functions are facilitated by the virtually instantaneous transmission of signals, largely from the peripheral nervous system, which extends to tissues throughout the entire body, to the spinal cord and the brain. The brain, which in cats is typically about two inches in diameter, responds by interpreting these signals and immediately transmitting appropriate instructions back through the brain stem and spinal cord to the appropriate destination via the peripheral nerves.

Although the meninges — a membrane consisting of three layers (the dura mater, arachnoid mater and pia mater) — envelops and protects the entire central nervous system, the great majority of tumors that develop in this tissue occur within the skull.

However, the causes for these growths remain unknown, says Dr. Faissler, although it is suspected that genetic factors are involved. However, he points out, advanced age is clearly a factor. “For sure,” he says, “these tumors are seen most often in cats who are 10 years of age and older.”

“These tumors progress very slowly at first,” says Dr. Faissler, “and the brain can adjust for a while. Sometimes we may not see signs of meningioma for a matter of months after a tumor has begun to develop. The initial signs depend on where the tumor grows. If it’s over the cerebellum, for example, you would typically see a decline in muscle coordination or a head tilt. If the tumor is over the cortex, the cat might have seizures. Overall, however, the clinical signs are variable — there are no absolutely typical signs.”

Many cats simply become reclusive — less interactive — possibly because they are experiencing a headache. Eventually, Dr. Faissler points out, the brain’s ability to adjust to the pressure exerted by the meningioma declines, at which point the clinical signs — seizures, for example — will intensify and become more frequent.

At a veterinary hospital, the presence of a tumor and the nature of it will be determined by means of neurologic testing and imaging technology. Magnetic resonance imaging (MRI) is best for this, says Dr. Faissler, and has become “the standard way to go.” Although computed tomography (CT) scanning is an option, he notes, “MRI is much, much better because you can see more clearly if there is any swelling and how that swelling is affecting the rest of the brain — whether there is any risk of herniation, for example.” Herniation refers to a shifting of part of the brain to a different compartment within the skull, and is a very serious complication.

Treatment of a meningioma depends on the extent to which the tumor has progressed. “Basically,” says Dr. Faissler, “if you have a mass on the brain that is adding volume, the logical treatment would involve surgical removal of the abnormal tissue — but only if the tumor is within reach. It also depends on the tumor’s location. If the growth is located on the top of the brain, over the cerebellum, it would be surgically reachable. But if the tumor is on the underside of the brain or close to important structures, then it would be much more difficult to remove.”

The second-best treatment option, he points out, would be radiation — unless the tumor has already grown to the point where it has caused mental or physical dysfunction. In some cases, euthanasia might be recommended. “If the tumor is very big and difficult to remove or is near herniation,” says Dr. Faissler, “or if the cat has severe clinical signs, then treatment can be very difficult. All of these factors can lead us to suggest euthanasia.”

If the meningioma is surgically removed, according to Dr. Faissler, the median survival time for patients is about two and a half years. However, about 25 percent of tumors will recur. “If you leave just one cell behind during surgery,” he notes, “the tumor can grow back locally at the surgery site.”

Also, he advises: “Keep in mind that these patients are 10 or 11 years old on average and are at higher risk of developing another type of tumor or a disorder such as kidney disease. So if the cat lives for another two years and reaches 14 years of age or so, it’s quite possible that he or she will die of a disease other than meningioma. This is not uncommon.”

According to Dr. Faissler, the most recent advance in addressing feline meningioma involves treatment of the cavity that remains following a procedure to remove a tumor. “After surgery,” he says, “you want to make sure that the soft tissues overlying the defect in the skull are not sagging and compressing the brain. Cats don’t have a lot of muscle in their skulls to cover such a defect. So I’ve developed what we call a replacement implant in which we use a mixture of titanium mesh and bone cement to close any big hole in the skull. It provides nice coverage, it keeps the brain protected, and it allows the patient to look like a normal cat after the surgery.”

Treating a meningioma is likely to be costly, says Dr. Faissler. “The initial diagnostic steps, including MRI, will cost between $2,000 and $2,500. Surgery will easily cost between $4,000 and $5,000. And radiation therapy can cost between $6,000 and $7,000. These numbers add up, so this can become very expensive.” But, on the bright side, the vast majority of cats can be significantly helped by treatment, and for long periods of time. — Tom Ewing