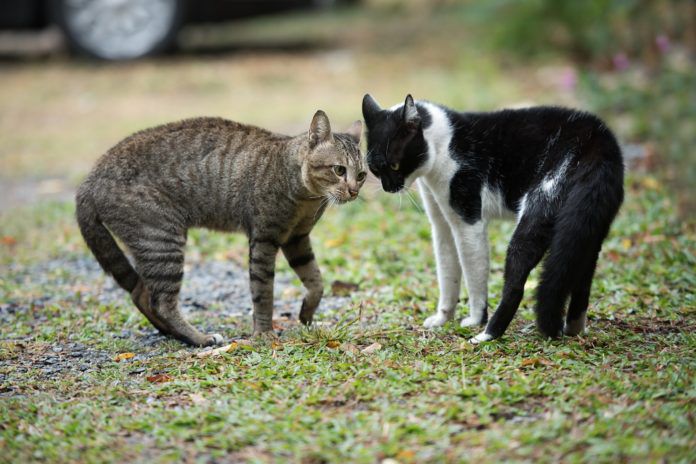 Among all of the viruses that pose a significant threat to feline health, none is more potentially devastating than the feline leukemia virus (FeLV), a submicroscopic organism associated with the illness and death of more cats worldwide than any other infectious agent. The most frequently diagnosed disease caused by this deadly virus is feline leukemia, a disorder marked chiefly by the excessive production of certain white blood cells (leukocytes) in a cat’s bone marrow.

Over time, these rapidly prolif-erating cells crowd an infected animal’s bone marrow, thereby interfering with normal blood cell production. At the same time, the leukocytes become unable to perform one of their vitally important functions — protection against harmful substances (pathogens) that may invade a cat’s body.

Vaccination has helped
The incidence of feline leukemia has declined significantly since the introduction several decades ago of a vaccine designed to protect against FeLV infection. “The disease used to be far more common,” says Kristine Burgess, DVM, an assistant professor in the department of clinical sciences at Tufts. “Before the vaccine was developed, FeLV was typically affecting perhaps 15 percent of the feline population. Nowadays, that number is down to about five percent or less in the U.S.”

Nevertheless, this virus — which is spread from cat to cat mainly through the urine, saliva, nasal secretions, or milk of infected animals — continues to be recognized as the chief causative agent of fatal infectious disease among U.S. domestic cats.

Why outdoor cats are at risk
According to Dr. Burgess, FeLV is especially common among cats who spend a good part of their time — or all of it — outdoors and are therefore more likely than strictly indoor cats to come in contact with infected animals who are shedding the virus into the environment. “The virus is transmitted most commonly through saliva,” she points out, “when cats fight with each other or groom one another.” Kittens can also be infected, she adds, by a female cat who is carrying FeLV while pregnant.

In addition to leukemia, FeLV infection can be the source of several other severe and even life-threatening disorders, including lymphoma (cancer of the lymphatic tissues) and anemia (a deficiency of red blood cells). Immune deficiency resulting from FeLV infection may also compromise a cat’s ability to ward off other infections. Cats of all breeds are equally susceptible to feline leukemia, notes Dr. Burgess, and she says that the risk for the disorder is not passed genetically.

How the virus travels
When viruses enter a cat’s body, they travel initially to the lymph nodes, then enter white blood cells, and from there — hiding within those cells — circulate throughout the body. If the cat is unable to fight off the infection at this point, the viruses eventually invade the bone marrow, the source of red blood cells and most white cells.

And from the bone marrow, the viruses may spread to the digestive system, respiratory tract, and salivary glands, where they continue to multiply. Eventually, a massive invasion of FeLV is likely to result in immunosuppression, the inability of a cat’s immune system to protect the animal against infection.

Without an effective immune response to control the virus’s spread, an affected cat will continue to be infected and to shed the virus into the environment for the rest of her life. Although some cats that are persistently viremic may remain healthy carriers of the virus for many years, the ceaseless viral reproduction taking place within their bone marrow will eventually suppress their immune system and make them subject to life-threatening diseases.

The common signs
The earliest signs of feline leukemia, which may become evident within a few weeks following initial infection, are likely to be nonspecific, such as weight loss, fever, diarrhea and diminished appetite. “But as time passes,” says Dr. Burgess, “more specific signs may appear as the virus gradually takes over a cat’s bone marrow.” Among these signs, which may develop over a period of months, are gastrointestinal problems, neurologic disorders, oral disease, and anemia. If affected cats are unlucky enough, says Dr. Burgess, they may get cancer — often lymphoma — which assaults the body’s spleen, lymph glands and other components of an animal’s disease-fighting network.

Diagnosis of FeLV infection is based on a cat’s medical history, clinical signs and the results of a test to determine whether the virus is present in a cat’s blood. A positive blood test will reveal the presence of FeLV antigens — proteins that are unique to the virus. The two most common tests are (1) an enzyme-linked immunosorbent assay (ELISA), which can be conducted in a veterinary clinic, and (2) an immunofluorescent assay (IFA), which must be done in a commercial laboratory.

Several vaccines to prevent FeLV infection are available, and veterinarians generally recommend that cats be vaccinated when they are kittens and receive a booster shot at one year of age. Owners should discuss with their veterinarians the possible benefits and risks of continuing FeLV vaccinations beyond that age.

There is no cure
Unfortunately, no curative treatment is available for a cat who is diagnosed with overt feline leukemia infection, says Dr. Burgess. “So all we can offer is supportive care, such as antibiotics, blood transfusions and medications that support the immune system,” she points out. “If the patient doesn’t respond to such measures, survival may be only a matter of months.”

Regarding home care for a cat who has been diagnosed with feline leukemia, Dr. Burgess advises the following: “Keep her away from other cats that are leukemia negative. And have her examined regularly by your veterinarian. A routine wellness exam will help spot any problems — such as anemia or a serious infection — before they become too far advanced. Cats with the infection are prone to many disorders, so you just want to stay on top of any problems.” — Tom Ewing