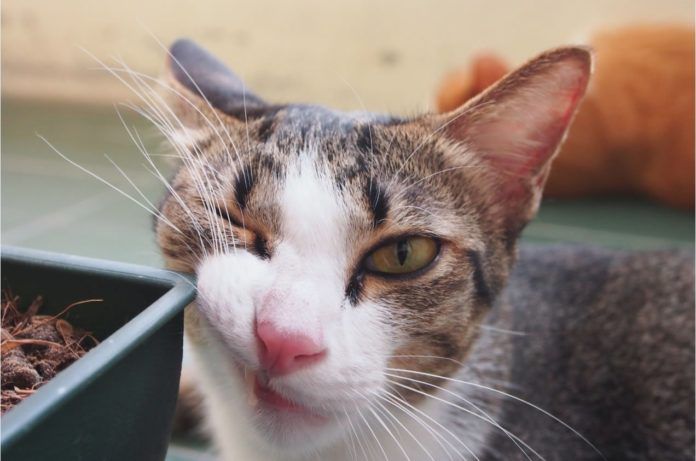 Q. My son recently adopted an adult cat from a shelter, and I notice that “Tigger” likes to rub his cheeks repeatedly on the legs of the furniture. In fact, he started to do the same thing to my face the other day when I was petting him on the couch!

What exactly does this mean? Is it the start of his becoming possessive and maybe aggressive?

A. Dear Lenore: The behavior is called bunting. Cats have scent glands around their faces (chins, sides, ears and neck). Bunting leaves a scent mark. There are many possible reasons why bunting occurs. Cats bunt to communicate their presence to other cats. According to Dr. Wailani Sung, DACVB, other cats may be able to tell how old the scent mark is, which then gives information about how long ago the cat that did the marking was in the vicinity. Cats are very territorial animals so scent marking can leave a sign for other cats that the territory is occupied.

Cats also bunt when they are anxious. Depositing their scent makes unfamiliar surroundings familiar and thus safer feeling. This could certainly explain why Tigger is bunting in his new and unfamiliar home.

Finally, bunting can be a sign of affection toward the owner. Cats in social groups may bunt each to promote and support bonds. Bunting in and of itself is not a sign of possessiveness or impending aggression.