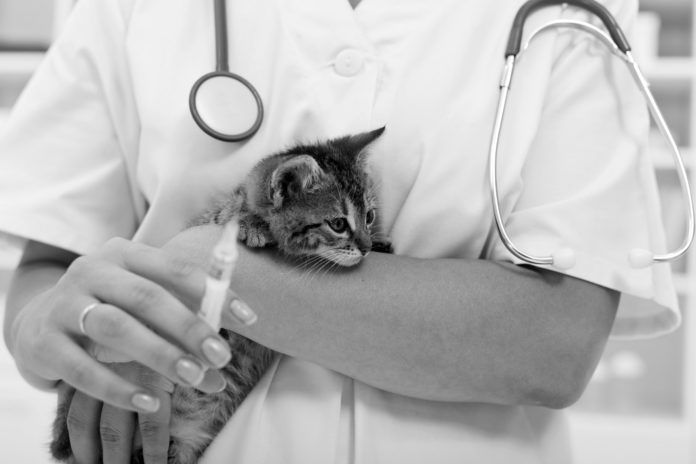 During the past half-century, the overall health of domestic cats has benefited immensely from the development of antibiotics — substances that kill bacteria or at least reduce their ability to replicate.

Administered orally, topically, or by injection, antibiotics are commonly used by veterinarians to prevent or relieve a vast array of bacteria-caused feline health problems, including salmonellosis, tuberculosis and bacterial hepatitis, as well as infections resulting from bite wounds, which, notes Dr. Michael Stone, DVM, are the most commonly observed causes of bacterial infections occurring in cats.

Among all antibiotic medications, says Dr. Stone, who is a clinical professor of small animal medicine at the Cummings School, the most frequently prescribed are penicillin-based medications, such as amoxicillin, which is used to treat infections of the respiratory tract, urinary tract, skin, ears, and nose. Overall, he points out, the track record of antibiotic medicines is excellent. “Modern antibiotics are remarkably effective,” he says, “with few side effects. However, no medication is 100 percent safe, and adverse effects are always possible.”

Cats at Risk for Harmful Bacteria at Any Age

Bacterial diseases and their potentially lethal effects can occur at any stage of a cat’s life. Kittens may be exposed to dangerous bacteria before all of their natural defense mechanisms have become fully functional, and some mature cats can be at elevated risk for infection due to immune system deficiencies. In cats of all ages, three factors combine to either increase or decrease susceptibility to bacterial infection: an animal’s overall physical health; the characteristics of a potentially infectious bacterium; and such influences as stress and poor nutrition.

Unfortunately, the sterling track record of antibiotic efficacy has been diminished in recent decades by a phenomenon called “resistance,” which can undermine the usefulness of antibiotics against some bacterial species. Resistance occurs when bacteria evolve and change over time in a way that reduces the effectiveness of an antibiotic that is normally expected to be effective.

In some cases, the bacteria develop the ability to neutralize the antibiotic. In other instances, a few of the causative bacteria somehow manage to survive the effect of the antibiotic drug, after which they can proceed to multiply and replace all of the bacteria that had been killed by the antibiotic. The surviving bacteria then continue to reproduce and cause additional and persistent harm. Furthermore, the antibiotic-resistant bacteria can spread from an initially infected cat to other felines with whom that animal has come in contact.

“Resistance implies that any surviving bacteria are less susceptible to being killed by an antibiotic,” explains Dr. Stone. “It’s a selective process that can occur when antibiotics are given too frequently. When a large number of bacteria are exposed to an antibiotic, most will be killed, but a low number will be intrinsically resistant due to mutation. These mutant bacteria then reproduce, and a resistant population emerges.” To make matters worse, bacterial organisms that resist the effects of an antibiotic may have a reproductive advantage over those organisms that succumb to it.

The Rise of “Super Bugs” and Growing Antibiotic Resistance

Perhaps most notorious among these super bugs is methicillin-resistant staphylococcus aureus (MRSA), a bacterium that causes infections in many parts of the feline body, most frequently a cat’s skin. While most MRSA infections are not serious, they may have life-threatening implications if they affect an animal’s bloodstream, lungs, or urinary tract. Moreover, this bacterium can potentially infect other animals in a household and possibly humans who come into direct contact with a MRSA-harboring cat’s urine or saliva, although Dr. Stone notes that “these bacteria are generally not contagious to people.”

All cat owners — in concert with their veterinarians — should make sure that their animals are protected to the fullest extent possible against infectious diseases through the use of vaccinations.

Most vaccinations are intended to prevent viral diseases; however, many viral infections can lead to secondary bacterial infections. If an ailing cat fails to respond positively to a properly administered initial round of antibiotic treatment, a veterinarian is likely to run a culture and sensitivity test to determine other types of bacteria that may be causing the infection and which alternative antibiotics might prove useful instead.

What Cat Owners Should Do

Of course, it’s up to a cat’s owner to see that the entire round of any prescribed antibiotic is given precisely as instructed. Some side effects associated with antibiotic treatment may occur, such as vomiting, diarrhea, and loss of appetite. “But these side effects typically resolve,” Dr. Stone points out, “when the round of antibiotics has been completed.”