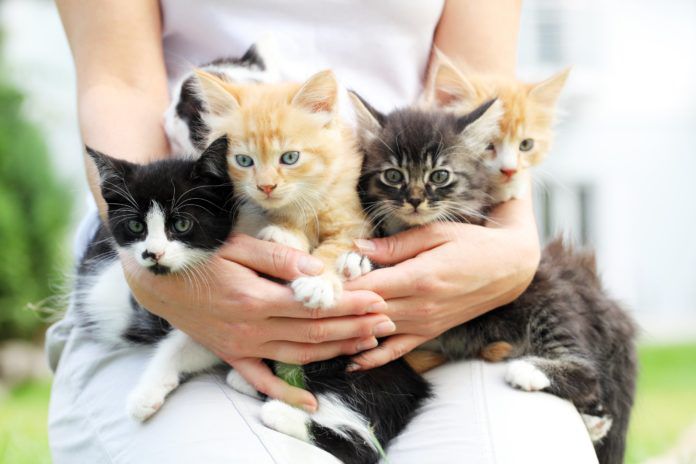 Most cats are likely to contract an upper respiratory disease at some point during their lives. Although a wide range of viral and bacterial agents may be responsible for these common disorders, perhaps the most frequently diagnosed is infection with the feline herpesvirus (FHV).

Young kittens are especially at high risk for such an infection, which is chiefly characterized by sneezing and nasal discharge. However, male and female cats of all ages and breeds are also susceptible to infection.

In addition to the characteristic runny nose and sneezing, Dr. Michael Stone, DVM, a specialist in internal medicine at Tufts, points out that FHV infection is also a significant cause of ocular disease in cats, such as inflammation of the mucous membrane lining the inner surface of a cat’s eyelids (conjunctivitis), and inflammation of the transparent outer covering of the eyeball (keratitis).

Like other viruses, FHV — unlike a bacterium or a fungus — is not a living organism. Rather, it is a complex submicroscopic structure consisting of genetic material encased in a protein shell. Although the virus is more of a chemical than a living creature, it has an irrepressible drive to reproduce rapidly in the body of a host animal.

Why it’s so pervasive

While FHV can survive for no longer than four or five days at room temperature in the external environment, it can thrive heartily in the moist secretions of an infected cat. And once FIV has invaded a cat’s system, there is no getting rid of it. The virus attaches itself to cells in the new host’s nervous system where it remains, permanently hidden from the immune system and awaiting reactivation.

Occurrence of the FHV infection is especially high in crowded multicat boarding facilities and adoption shelters, where the virus can easily be passed from one animal to another. “Cats who are exposed to FHV can become chronic carriers who shed the virus into the environment during periods of stress,” explains Dr. Stone. “The stress of giving birth, for example, results in viral shedding and allows infection of nursing kittens.”

In general, the virus is passed from cat to cat through grooming or other direct physical contact. FHV can also be spread through the air. During acute infection, for example, an infected cat will sneeze viral particles into the environment, and cats that are nearby may inhale them. FHV can be transmitted from a newly-infected queen to her kittens while grooming them after they are born. Kittens are most susceptible at five weeks of age or so, after they have lost their natural maternal immunity.

The initial signs of FHV-related disease typically emerge within four or five days following infection. Sneezing is typically the first sign of infection, followed by discharge from one or both eyes. The discharge is usually watery to start but soon may become thick and purulent. The affected cat’s eyes may be reddened and swollen, and some affected cats will develop corneal ulcers.

In rare cases, there may be so much destruction of the epithelial cells in the upper respiratory tract — especially in the nasal sinuses — that bacteria are able to establish chronic infections, especially chronic sinusitis. In most instances, however, FHV infection will not pose a severe threat. Instead, the sneezing and discharge from the eyes and nose will persist for a matter of days and, within a week or two, the infection will self-resolve, the signs will disappear and the cat will return to normal.

However, while the signs of FHV infection typically vanish within a matter of weeks, the virus remains forever in most affected cats, sequestered in a dormant stage within an animal’s nerve cells. At any point thereafter, the virus can become reactivated and the signs — the sneezing, watery eyes and so forth — may reappear periodically and linger for a few days before vanishing once again.

In fact, years may pass between these fleeting recurrences, which are often brought on by stressful experiences, such as exposure to cold temperatures, giving birth to kittens or the introduction of a new cat or dog into a household. Fortunately, these episodes rarely cause an affected cat to show signs of serious illness. However, while the virus is dormant, it can still be transmitted to an uninfected cat even during one of these relatively calm periods.

The clinical signs of FHV infection are similar to those associated with other feline respiratory infections, such as the feline calicivirus (FCV), an unrelated virus. Confirming that FHV infection is the source of the problem will require laboratory examination of fluid obtained from an affected animal’s nasal passage. In most cases, however, a veterinarian may opt not to confirm a tentative diagnosis, but to initiate immediate treatment of what is obviously an upper respiratory infection of viral origin.

Due to the wide prevalence of FHV, the American Association of Feline Practitioners (AAFP) lists the vaccine that protects against this virus as among the “core vaccines” for cats. (The other core vaccines protect against feline panleukopenia virus, calicivirus and rabies.)

The AAFP recommends that all kittens be initially vaccinated for FHV at six weeks of age and that they receive booster shots every four weeks after that until they are at least 12 weeks old. Another vaccination should be administered one year following the initial vaccination, and booster shots should be given every three years thereafter.

“For cats in heavily contaminated environments such as catteries, boarding facilities or large multicat households with frequent introductions, annual vaccinations may be appropriate,” says Dr. Stone. “In addition to vaccination, reduction of stress and overcrowding is important to prevent viral shedding.” — Tom Ewing