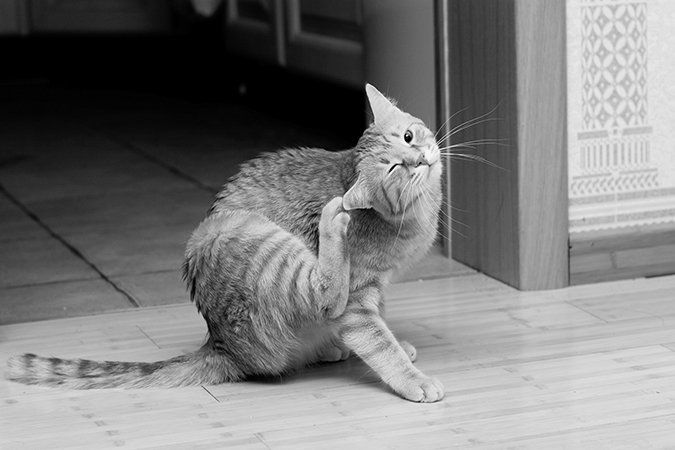 The feline skin is, by definition, an organ — a differentiated component of an animal’s physiologic makeup that performs a wide variety of specific life-sustaining functions. In addition to serving as a matrix for a cat’s head-to-toe haircoat, the skin serves as a barrier against invasion by harmful microorganisms; it protects against injury to deeper tissues; and it provides a watertight seal that retains an animal’s bodily fluids and prevents dehydration.

The skin also helps to insulate a cat’s internal organs against the external world’s extremes of heat and cold; and it contains sensory receptors that pick up information from the environment — such as the presence of nearby objects or potential predators — and relay that information to an animal’s brain.

Despite its eminently useful and typically durable structure, the feline skin is subject to a wide array of disorders, most of which are readily treatable but — if ignored by a cat’s owner — can sometimes progress to a life-threatening stage. “Feline skin diseases are extremely common,” says Lluis Ferrer, DVM, a professor of dermatology at Tufts. “They are one of the main reasons that cat owners seek veterinary consultation. This is probably a consequence of the skin’s complex structure and the many potentially harmful agents to which it is exposed.”

Depending on the specific dermatologic disorder and the stage to which it has progressed, notes Dr. Ferrer, these diseases can potentially compromise any or all of the skin’s three layers of tissue: the epidermis, an outer layer that prevents the loss of vitally important water and salts from within the body and protects the animal against assault from the environment — direct exposure to solar rays, for example, or bacterial infection; the dermis, a support structure immediately beneath the epidermis that is made up of blood vessels, nerve tissues, and several specialized substances, embedded in which are the hair follicles and sweat glands; and the subcutis, a layer of intertwined fibers that enclose the fatty tissue of the skin.

According to Dr. Ferrer, the most frequently diagnosed feline dermatologic diseases fall into three broad categories: parasitic, immunologic and fungal. Among these disorders, parasitic conditions are by far the most common. They occur as a reaction to the presence on the skin of such external organisms (ectoparasites) as fleas and lice. These minute, speedily proliferating creatures can cause relentless itching and irritability, with noticeable skin damage a possible consequence of compulsive scratching.

Although flea infestation is frequently responsible for skin disorders in the general feline population, the increasingly widespread use of flea-control products during recent years has significantly reduced its occurrence. Another commonly diagnosed parasitic cause of feline skin disease is mites — tiny spiderlike creatures that can infest an animal’s ears, spread around the surface of its body, and cause a serious skin disease commonly referred to as mange.

Less often diagnosed yet also observed with relative frequency, Dr. Ferrer points out, are immunologic diseases, which occur as the result of an abnormally intense immune-system response to food or to certain inhaled substances — such as pollen, molds, household dust or drugs. In addition to skin lesions and itchiness, these disorders may prompt other readily observable clinical signs such as watery eyes and sneezing. Cats are also subject to fungal infections, which are caused by a wide variety of rapidly proliferating molds and yeasts that feed on epidermal keratin, a protein substance that is the main structural component of a cat’s hair.

High on the list of disorders in this category is a disease called feline dermatophytosis — better known as ringworm — which results from the presence of certain fungi that can flourish in an animal’s haircoat and claws as well as its skin. Fungal skin infections are most commonly diagnosed in geographic areas where warm, muggy climates encourage the development of these microorganisms.

Other sources of feline skin disorders — though far less frequently observed — can certainly pose a serious threat if they remain undiagnosed and untreated, says Dr Ferrer. Feline skin, for example, is second only to the lymphatic system as the site of various benign and malignant tumors, cysts and other abnormal growths. These growths, which are not uncommon in older cats, may persist harmlessly, but malignant tumors can spread eventually — and lethally — to other vital organs such as the lungs and the liver.

Although the skin of a healthy cat is typically resistant to infection, bacterial microorganisms may penetrate into the epidermis of an animal at the site of a wound. This can result in a serious localized infection in the tissues beneath the skin — an abscess. Most abscesses must be drained by a veterinarian before they will resolve, and require treatment with antibiotics as well. Fortunately, bacterial infections of the skin in the absence of a wound (pyodermas) are infrequently seen in cats, Dr. Ferrer points out, whereas they are a very common problem in dogs.

In rare cases, skin disorders may also occur as the byproduct of underlying malfunctions of hormone-secreting glands such as the thyroid gland. A cat’s nutrition can also play a role in the development of a skin disorder; for example, dry, scaly skin and a brittle, disheveled haircoat can result from a deficiency of certain important dietary components such as proteins and fatty acids. (These skin conditions rarely occur in cats that routinely consume a complete and well-balanced diet.)

Also of note is a seborrheic disorder, which stems from defects in an animal’s ability to produce keratin — a deficiency that can result in inflammation and the development of scales and crusts on the skin.

A related disorder — one that is quite frequently seen but not regarded as a serious health problem — is feline acne, the overproduction of keratin and a resulting buildup of it in an animal’s hair follicles, which prompts the emergence of blackheads on an affected cat’s chin and lips.

And, says Dr. Ferrer, infection with various viral agents — for example, the feline immunodeficiency virus (FIV), the feline leukemia virus (FeLV), the feline herpesvirus, and the feline poxvirus — may, in some cases, be accompanied by skin disorders.

Age can play a role

As for risk factors, Dr. Ferrer says: “Both genders are equally at risk, but age is important. For example, allergies, ringworm and parasites commonly appear in very young animals or young adults between one and three years of age, while cancerous diseases most often occur in older animals. Because of their exposure to parasites and fleas, outdoor cats are at greater risk than indoor cats. And cats that are in close contact with other cats that have ringworm are at higher risk to pick up the infection because it is very contagious.”

Breed in itself is not a risk factor, he points out, although long-haired cats may be more vulnerable due to the matting of their coats; these clumps of hair can promote the development of fungal and parasitic infections.

Diagnosing a skin condition, he says, involves, first of all, “a combination of the patient’s medical history and a thorough physical examination of the cat’s skin, paying close attention to the type and distribution of the lesions. Then we will do a few diagnostic tests — skin scrapings, fungal cultures and examination of cytologic samples. We may start by ruling out parasitic diseases, and if we suspect a food allergy, we would try putting the cat on a hypoallergenic diet designed to identify the specific food that is causing the problem. If these tests fail to identify the cause of the disease, we will proceed to other, more sophisticated techniques, such as skin biopsies or tests to look for the presence of antibodies against environmental allergens.”

If diagnosed at an early stage, says Dr. Ferrer, the majority of skin problems — except for some cancers — are treatable and usually curable. “However,” he adds, “it’s not possible to make a definitive prognosis in every case. Keep in mind that you’re talking about 100 or more possible causes.”