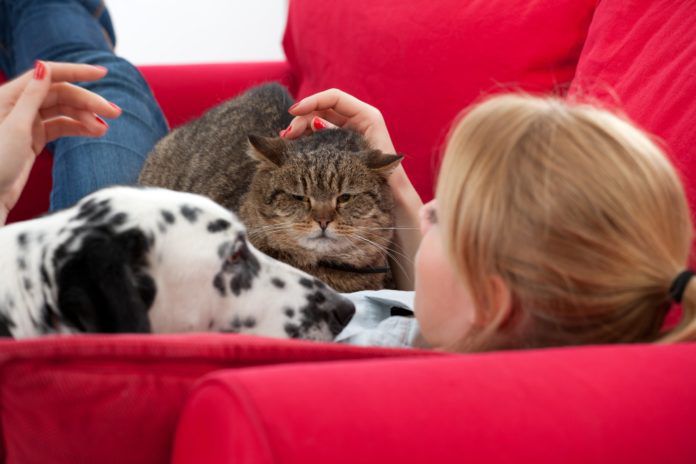 Cancer. The word alone evokes high emotions when we hear its diagnosis, whether the disease involves a family member, friend or beloved pet. Our thoughts tend to run from astonishment to guilt and fear as we grapple to come to terms with it, and what to do next. Like humans, our pets are also living longer these days — and that fact alone contributes to the increasing likelihood of some of our cats one day developing cancer.

According to the Veterinary Cancer Society, approximately six million dogs and nearly that many cats will be diagnosed with cancer each year; 47 percent of dogs die from cancer — especially dogs over the age 10 — and 32 percent of cats will succumb.

While cancer isn’t as prevalent in cats as it is in dogs, cancer in cats does tend to be more aggressive. This may be due in part to the cat’s protective skill in concealing pain and illness, which can make diagnosing the disease more difficult until it’s at a more advanced stage and harder to manage and treat.

Cats are treated less than dogs
According to Kristine E. Burgess, DVM, DACVIM, assistant professor of oncology at the Cummings School of Veterinary Medicine, “I think that the difference between cancer in cats and cancer in dogs is that fewer people seek treatment for their cats than for their dogs.

“This sadly reflects the historical view that many people simply don’t value cats as much as dogs. Also, veterinary advancements in feline treatments have been slower.”

Dr. Burgess also believes that there are some unfortunate misconceptions regarding cats and cancer treatment. “People need to know that treatment is available for cats. The biggest misconceptions I hear are: ‘treatment is really expensive,’ ‘it’s really impactful on their quality of life’ and ‘it’s just a cat and people can get a new cat.’ People need to know that treatment isn’t necessarily out of their reach financially — and we are able to maintain a good quality of life for the pet and that cats are valuable and worthy of care.”

While there are several treatment options available, it’s important to know that not all types of cancer respond well to treatment, and some treatments are only available at specialty hospitals. The decisions to treat or not to treat, how to treat and the accompanying side effects must be carefully weighed while putting the cat’s quality of life first. Knowledge is power, so it is critically important to discuss your options in depth with your veterinarian — including a possible referral to a specialist — before making your decision.

Staging tests for the pet
Before any treatment begins, the pet will undergo a series of “staging” tests to determine where the disease is within the body and if it has spread to other locations. “The staging tests provide us with a baseline of your pet’s general health, if there are other co-morbid conditions — such as kidney or heart problems — and provide us with information on the extent of the cancer,” explains Dr. Burgess. This information is crucial in guiding our treatment recommendations and better understanding a pet’s prognosis.

Treatment options
There are three primary therapy options for cancer: surgery, radiation therapy and chemotherapy. Some of the treatments may be available at general practice veterinary clinics, whereas others are only available at specialty hospitals. The appropriate treatment depends on many factors — including the type of cancer, its location and whether the cancer has spread to other parts of the body. It also depends on what’s appropriate for the individual cat and what’s available or accessible to the pet owner. All of these concerns should be discussed in depth with your veterinarian.

Most common: surgery
Surgery is the most common form of therapy. The old expression that “a chance to cut is a chance to cure,” is often true, says Dr. Burgess. But that does depend on the cancer and the individual cat. “If you have a cancer localized to one area — and it is not known to have a high propensity to spread to other areas, or metastasize — then good local control through surgery can provide long term tumor control. However, a lot of cats, for some reason, tend to get cancers that have a higher chance of return at the site where surgery has been completed, or that tend to spread to other locations.”

How radiation therapy works
Radiation therapy uses external beam radiation, similar to X-rays, from a machine known as a linear accelerator. “This is the type of radiation therapy offered at Tufts small animal hospital. The machine focuses high energy beams to the tumor site and the procedure lasts a few minutes. We often use it in conjunction with surgery to address any cancer cells that may be left behind after surgery.

“It is usually very effective for cancers we know to be responsive to radiation therapy. In cats, the common use would be for lymphoma in the nose, or nasal lymphoma, for some oral cancers and brain tumors. Often, radiation is used on vaccine-associated sarcomas,” says Dr. Burgess. (Note: Your cat will not become radioactive!)

The tumor type determines what protocol will be used. All treatment recommendations are based on the likelihood of the tumor responding to radiation therapy. “If the oncologist determines that a pet has a good chance to live for a long period of time after the treatment, the pet could receive radiation treatment every day for up to three to four weeks with the hope that the pet would live for another one, two or even three years or longer. With these protocols, the pet may experience some minor side effects that look like sunburn at the location, but we expect the pet’s life expectancy would be worth putting the pet through the treatment,” says Dr. Burgess.

Dr. Burgess explains that other side effects may include a loss fur that doesn’t return, or the fur may grow back in a different color (for example, a black cat’s fur may grow in white). If the radiation is administered to the mouth, the cat could develop oral mucositis, inflammation of the oral cavity; if administered to the back of the throat, they may develop pharyngitis, inflammation of the pharynx. Basically, there is the chance of an acute inflammation at the location that usually resolves within two weeks with supportive care.

A less intensive protocol
Palliative radiation therapy is a much less intensive protocol where the cat would receive fewer treatments, with the goal of shrinking the tumor or preventing further tumor growth for a period of time. The goal of these protocols is strictly preserving the pet’s quality of life for a variable amount of time. This option may be used if pain is associated with the mass, or if the tumor is impacting a pet’s ability to enjoy a good quality of life.

The prognosis for cats treated with the various protocols of radiation therapy varies and depends on various factors, such as the type of cancer, where it’s located and how responsive the cancer is to the radiation. There are too many variables to provide an owner with a one size fits all answer, says Dr. Burgess.

Radiation therapy is most often offered at specialty hospitals. The cost varies with the protocol used, ranging from approximately $2,000 to $5,000, and varies by location. The Veterinary Cancer Society website provides information regarding hospitals that offer radiation therapy in various regions of the U.S. They recommend you search by state so that you can decide how far you are willing and able to drive for treatment. (You can visit www.vetcancersociety.org/pet-owners/)

Chemotherapy in cats
Chemotherapy treats cancer using anti-cancer drugs. “As a medical oncologist, I use chemotherapy for cancers we believe to be responsive to drug therapy. The most common cancer we see in dogs and cats is lymphoma, which happens to be the most responsive to chemotherapy,” says Dr. Burgess.

The drugs used to treat cats with cancer are the same that are used to treat people, but the emphasis for cats is maintenance of quality of life. With humans, there is a focus on a cure — and as a result, people are put through a much more strenuous protocol.

“Our goal is to treat the cat so they never know they have cancer and aren’t impacted by the therapy at all. The drugs are usually administered intravenously, and depending on the protocol and on the cancer, the treatment could be once a week for a period of time, every other week, every three weeks; it varies quite bit,” says Dr. Burgess.

Supportive medications are generally sent home to counter light side effects of nausea, vomiting and diarrhea. If the side effects are more serious, the dose of the next chemotherapy treatment can be altered in an effort to avoid them in the future. “The goal is that side effects don’t happen, and that we are preserving the quality of life,” says Dr. Burgess.

With chemotherapy, cats don’t lose their fur, but they may lose their whiskers, which will grow back.

Precautions to take
If you’re treating your cat with chemotherapy, the standard recommendation is that you should avoid the pet’s waste if you’re pregnant, breast-feeding or immuno-compromised. Ask someone else to clean the litter box and clean up any vomit. That individual should wear gloves. The risk of exposure is relatively low and exists just for a few days after treatment, according to Dr. Burgess.

The prognosis for cats receiving chemotherapy varies according to the same factors as other forms of treatments, including the type of cancer, how responsive it is and the individual cat. Dr. Burgess says, “It seems counter intuitive that a cat with cancer gains weight while on chemo, but when you’re treating the disease appropriately, they’ll go back to being able to absorb nutrients, regain their appetite and regain their weight. Ideally, if we’re successful in our treatments, we can bring them back to being the cat he or she was before they got cancer.”

The cost for chemotherapy depends on the recommended protocol (whether once a week, every other week or every three weeks), and the drugs used. The average cost is about $150 per chemo treatment for a cat, according to Dr. Burgess. She says some private veterinarians can administer chemotherapy, in addition to board-certified oncologists.

The role of finances
Financial considerations often play a role in the decision-making process for pet owners. It is important to note that there are foundations that offer financial support for certain diseases and treatments for pets with cancer. Additionally, some veterinary specialty or teaching hospitals occasionally offer clinical trials that may provide financial assistance for participating in the trial.

While a diagnosis of cancer in a pet is the last thing we want to receive, it’s important to know that good treatment options do exist. Not all cancers respond to all treatments, and not all cats are optimal candidates, but veterinary medicine continually changes. Regardless of treatment option — or even the decision not to treat — your cat’s quality of life is the paramount concern. — Ramona Marek, MS, Ed