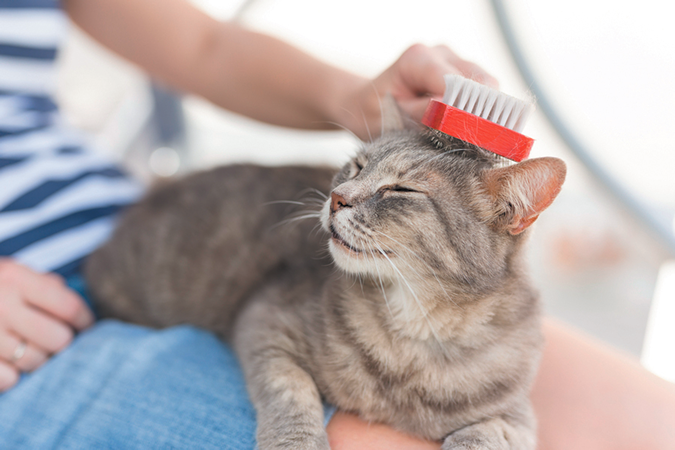 Self-grooming only goes so far, especially as a cat ages and can’t reach around to his body parts as well. That’s why you want to supplement a cat’s licking “baths” with brushing. It won’t only help your cat look his best. It will remove dirt, grease, and dead hair from his coat, not to mention cut down on hairballs. In addition, it will help remove loosened skin flakes and improve circulation.

Even better: cats generally like to be brushed. But as with most things feline, they like it until they don’t. Here’s how to do it so you don’t get swiped by sharp claws or teeth in the process.

Make sure your cat is in the right mood — calm and comfortable. You don’t want to brush him when he’s feeling agitated.

Start gently. And start where the cat likes being petted to begin with — under the chin, below the ears. The first sessions might last less than 1 minute. Move toward other areas from the chin and ears, even the belly. But if at any point you sense that your cat is about to get fractious, stop. Try it again another day, always cooing when he cooperates to let him know you appreciate his good will. You can even feed tiny pieces of a delectable treat as you go, if that increases his staying power.

The right type of brush for your pet’s hair

Some cats appreciate a deeper scratch — it feels like a massage to them, and a deeper brushing will also do a better job of pulling off whatever shouldn’t be there. But some cats are extremely sensitive and may only be able to tolerate very soft bristles. Others prefer cat grooming mitts. They have rough surfaces on the palms — your cat literally gets petted while being groomed.

For particularly sensitive cats, there are self-grooming toys that he can rub against for a good scratching — not as good as your own all-around brushing, but better than nothing. Whatever your cat’s preference and ability to tolerate the grooming, go with the flow and stop when you sense he may be getting ready to tell you enough is enough. A happier cat and a good bond between the two of you is more important than forcing your cat to have the perfect brushing.

Short-haired cats. The ASPCA advises using a metal comb on short-haired pets, if possible. Comb in the direction your cat’s hair grows, working up to his letting you do it all over his body. Another option for short-haired cats, especially for removing dead fur, is a rubber brush.

Long-haired cats. Whereas you may be able to get away with brushing a short-haired cat once a week, a long-haired cat who sheds throughout the year is going to need to be brushed every few days — not just to remove dirt and dead hair but also to prevent tangles. If you do come across knots, you can try sprinkling talcum powder over them and gently teasing them apart with your fingers. Again, if the cat can’t take all that handling, let it go. The tangle doesn’t have to come undone in a single session. And if your hands can’t do the trick, try using a mat splitter. It’s a pointy device (which can be razor sharp) that divides the mat into separate sections. Those sections are easier to rake or brush out than a single, larger mat.