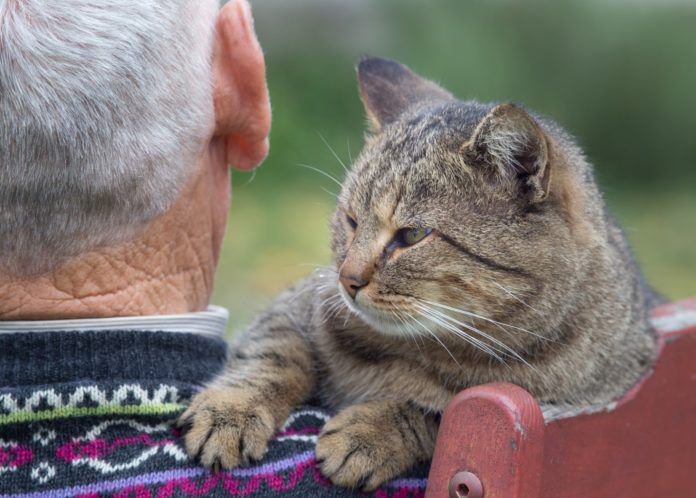 First scenario: Your 14-year-old cat has a large but benign tumor in one of her toes that is causing her pain and interfering with her mobility. You decide to:

(a) Schedule a surgery to excise the tumor.

(b) Realize that the tumor is causing pain and limiting her freedom and will euthanize her when you have to because the risks of anesthesia that go along with the surgery are too great.

Second scenario: Your 14-year-old cat has a lump on her side, near the juncture between one of her back legs and her trunk, and it has been growing slowly but steadily. Your vet has performed a needle aspiration and found, luckily, that it’s benign — but you’re concerned that the increasing growth will reach a tipping point that will make it difficult for her to use that leg to get around. You decide to:

(a) Schedule a surgery to remove the steadily growing lump.

(b) Know that the problem is going to continue to worsen and will euthanize her when the time comes because the risks of anesthesia that go along with the surgery are too great for a cat her age.

Third scenario: Your 14-year-old cat is diagnosed with mammary cancer — usually an extremely malignant tumor in cats, often fatal, especially without surgery, which is fairly major in this type of situation. If you authorize an operation where the cancer has manifested itself and also give the green light for chemotherapy, there’s a chance that your pet will live another year of good-quality life.

You feel that’s a reasonably long time for your cat, but the treatment will be costly, and there are no guarantees about the effectiveness of the operation. This will be followed by chemo — a year is an estimate, not by any means a prognosis engraved in stone. Some cats live longer; some succumb much sooner. You decide to:

(a) Schedule the surgery to try to excise the cancer.

(b) Know that the pain of the cancer is going to continue to worsen and will euthanize her when the time comes because the risks of anesthesia that go along with the surgery are too great.

As the three scenarios make clear, there is no one-size-fits-all answer. But for the first two, at least, there are truly informed ways to narrow the options. One of them has to do with an understanding of anesthesia in old cats.

The reality of anesthesia
“A common fear people have is that it’s unsafe to anesthetize a cat over a certain age,” says Tufts veterinary surgeon John, Berg, DVM, DACVS. “It’s a question we get all the time: ‘Can my old cat withstand anesthesia’?”

The answer: “As a general rule, it’s very safe to anesthetize old cats,” Dr. Berg counsels. “It’s probably true that it’s slightly less safe to anesthetize an old cat than a healthy young cat,” he says. “But many of the cats who are sick and need surgery are old cats. We anesthetize them all the time, and most do have something wrong with them. That’s why they’re having surgery.”

Of course, he points out, it’s not going to be as safe to anesthetize a very old, very sick cat. But it’s very safe to anesthetize an old cat who has one or two manageable health problems. “In fact,” Dr. Berg says, “it’s extremely rare that we say to an owner, ‘we can’t anesthetize your cat because it’s just too unsafe.’ Maybe for an old cat who has, say, severe congestive heart failure, the risk of anesthesia becomes a real factor in the decision making. But for the most part, it’s not. That’s why, in the vast majority of cases, the need for a cat to have a problem corrected surgically is going to outweigh the anesthesia risk.”

Age is not a disease
Another way of putting it, both for veterinary medicine and human medicine: Age is not a disease. “What I’ve always interpreted that to mean is that just because a patient is old doesn’t mean you shouldn’t treat her,” says Dr. Berg. “Age is a consideration, yes, but there is no such thing as an age that precludes appropriate interventions should a disease arise.”

Which brings us back to Question 1. You can take answer (b) out of the running because you now know that concerns about putting an old cat “under” are unfounded. But what’s it going to be: (a) Schedule the surgery or (c) wait and see?

The answer is A — go for the surgery, as long as financial considerations don’t preclude it. Why? The positive effects of the operation are immediate. As soon as she comes to, your old friend will be on the road to walking normally again rather than struggling to get around in pain day to day. Whether she has six months left or three years, she’ll have a much better, much more comfortable quality of life.

“It’s akin to helping your 85-year-old grandmother walk around more easily,” Dr. Berg says. You don’t know how much time she has left, but she shouldn’t have to live out the rest of her days crippled if she doesn’t have to, and can go back to leading a reasonably comfortable, happy life very soon after the operation is over.

Of course, if an owner can’t afford the operation, that’s a different story. And no one is a “bad owner” for deciding not to put themselves into a financial crisis to save their pet’s health. We firmly believe that as long as you love your cat from the moment she’s under your care until the moment she leaves this world, you have made the right ethical and emotional commitment.

But if money is not as issue, or if you have pet health insurance, the operation is the way to go in this case.

That’s true for any condition an old cat might have where an operation brings quick relief and takes a cat essentially back to the quality of life she had before, or at least a quality of life that she can enjoy. If you can afford it, go for it, pretty much no matter how old your cat is, if the problem far outweighs any anesthesia risk.

A slow developing problem
Okay, but what about scenario number 2, where the problem, which can be fixed surgically, is not causing immediate harm or danger?

Do you have it removed in an operation to make sure it doesn’t reach a tipping point that will interfere with her quality of life? It doesn’t sound unreasonable now that you know the anesthesia risks are very, very small.

“It depends in part on the size of the lump,” Dr. Berg says. “If it is very small, the cat, already in her later years, is highly likely to die of something else before the lump would ever get big enough to keep her from getting around. It won’t interfere with comfort or mobility until it gets huge, and that is unlikely to happen during the remaining course of her lifespan.”

This one is definitely a “wait and see,” as are other problems that need to be watched but are not interfering with your cat’s enjoyment of her days, and not shortening her lifespan, either. No matter what the issue, your veterinarian should be able to go over with you whether treatment can wait based on your cat’s current quality of life measured against her age.

A harder decision
In our scenario number 3, we are dealing with mammary cancer. Potentially life-threatening cancers are often the most difficult kind of disease to make a decision about. That’s because it can’t be predicted with certainty what the result will be in terms of how long the cat will continue to live, and whether she’ll continue to live well. Your cat could live another year, a year plus many more months, or much less than a year.

“You’ve got a potentially difficult, costly treatment where the outcome is uncertain,” says Dr. Berg. Complicating cases like this is that “the old age of the cat will make a major surgery like removal of a malignant tumor harder to go through and harder to recover from. It is easier for a young cat to recover quickly from such an involved operation than a really old cat. It’s more of an adjustment for an old pet,” Dr. Berg says.

Then, too, he says, “if a cat is 11, she would have a much better chance of getting that extra year if her mammary cancer were treated. A cat who is 14, even without a mammary tumor, might not have a year left. In other words, you have to balance the age and the likely amount of time the cat has left naturally against the odds of extending her life with treatment.”

It’s hard, Dr. Berg says. “The very things an owner needs to know —how long will my cat live if we treat her and how long will she live if I don’t — we can’t give an answer to.”

Interestingly, this is a grey area in which an owner can bring something to the table that the veterinarian can’t — a sense of where the cat is in life, regardless of her age. Consider that not all old cats are alike. “There are 14-year-old cats who are very old and very tired and not able to deal with as much as when they were three, and there are 14-year-old cats who are more like three-year-olds,” Dr. Berg remarks. That is, medical care decisions often depend more on the attitude and vigor of the cat than on the age. The owner probably has more of a handle on that,” Dr. Berg comments. “The owner sees the cat every day, not the vet who is making an assessment during a relatively short visit. That knowledge helps an owner to play the odds.”

And playing the odds is exactly is what an owner is doing in that situation. “It’s impossible in such cases to tell owners what to do,” Dr. Berg says. “We can give an approximation, some level of probability, but we can’t say what will happen in each scenario. We are blinded to the outcome.”

Going with your gut
So how, really, can an owner finalize a decision? “They have to do it based on a gut feeling,” Dr. Berg says. You can factor in how well and how quickly the cat is likely to recuperate from the surgery, you can factor in her age, how vigorous and happy the cat is regardless of age, cost, all those things, but in the end, “it’s impossible to make a purely intellectual decision. There are key pieces of the puzzle the owner just doesn’t have,” he says.

To go with your feelings might not initially seem helpful, Dr. Berg says, but it is a way of taking all the uncertainty combined with the certainties and synthesizing the whole into a choice. “Generally, we find it’s really helpful to people when there’s no cut-and-dry answer and we advise them to do what their gut and their heart tell them to do. It’s a way of letting them know it’s okay not to be able to make the decision entirely with your brain because there’s just too much missing information.”— Larry Lindner