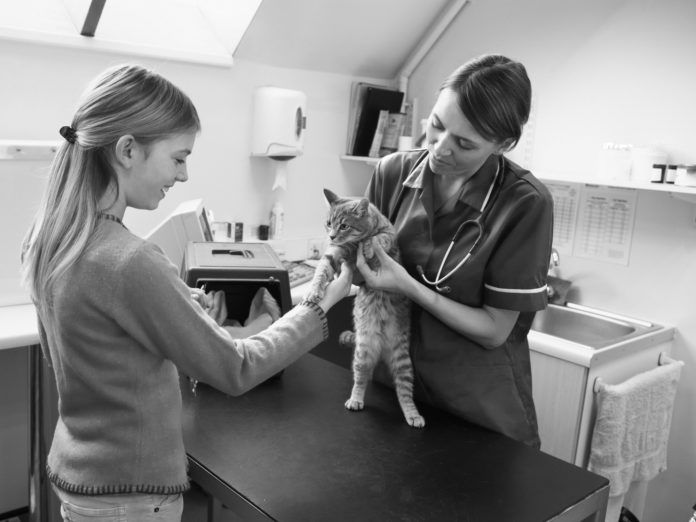 Regardless of age, breed or gender, any cat — at any point during his or her lifetime — can develop a serious and potentially disabling anxiety disorder. This an affliction in which a cat is seriously and persistently disturbed by phenomena or situations which a normal cat would ignore or soon learn to disregard.

Unfortunately, this baffling condition is one of the more frequently observed among all feline behavioral syndromes. In some cases, the perceived threat may actually be something about which a cat could be justifiably anxious — the presence of a hostile dog or cat in the same household, for example. But in other cases, the source of the torment might not pose any real threat at all — the rumbling sound of distant thunder, for example.

In either case, the responsible cat owner should take steps to relieve the cat of her anxiety. Repeated consultation with a therapist specializing in animal behavior — who will likely attempt to “decondition” an obsessively fearful cat to the object of its phobia — may succeed in resolving the problem. And in the past few decades, significant progress has been made in treating feline anxiety disorders with certain drugs that were originally formulated to treat similar conditions in humans.

“Anxious feelings in a cat may be rooted in a fear that something will either happen or not happen,” says Nicholas Dodman, BVMS, director of the Animal Behavior Clinic at Tufts. “For example, an anxious cat that is left at home alone may be worried that its owners will never come back. Another cat may be worried during a noisy thunderstorm that something bad is going to happen to it.”

Wariness is a useful response to a phenomenon that a cat has never before experienced. “It’s understandable that a cat would be wary about going around a corner for fear that a predator might be waiting for it,” says Dr. Dodman. “That instinctive kind of anxiety is healthy and useful — it’s what we call adaptive behavior. It helps the cat survive. On the other hand, there is maladaptive behavior. This is a dysfunctional kind of anxiety, a concern about something that really isn’t an issue. Thunder phobia or separation anxiety — the fear that owners who have left the house for a brief period will never return — are good examples of that type of problem.”

Some causes of anxiety

Other common triggers of severe anxiety in a cat include: the arrival of a new baby in the household; the permanent departure of a family member from the household; the rearrangement of furniture in the home; persistent and loud noise from a source outside the home; or even the relocation of a cat’s litter box.

“Cats can be anxious about living creatures,” says Dr. Dodman, “such as a dog that has just been brought into the home. But they can also be disturbed by inanimate things — flapping curtains or strange smells.” Such anxiety disorders tend to become worse over time if they are not addressed, he says, and the earlier in its progression that a serious phobia is identified, the easier it will be to relieve in most cases.

Not a permanent cure

The aim of these medications is not to cure a cat’s phobia, but to ease his mind and mute his reactions to the causes of his anxiety. Although the medications can provide temporary relief from anxiety, they do not treat the underlying cause or causes. And once an animal is withdrawn from the drugs, the anxiety is likely to return — unless, of course, the underlying cause of the anxiety has meanwhile been significantly relieved or eliminated through other measures.

The drugs that are used to reduce anxiety in cats are compounds that affect an animal’s limbic system — the group of structures in the brain whose biochemical processes affect mood and emotion. Although the action of these drugs and their impact on mood is not fully understood, it appears that they have an affect on the brain’s ready supply of neurotransmitters — chemicals such as serotonin, norepinephrine and dopamine — that transmit nerve impulses within the brain.

Scientists believe that an improper balance of these neurotransmitters — either an excess or a deficiency — contributes to anxiety. The anti-anxiety medications serve to stimulate production and maintain a proper supply of these chemicals in the brain, thereby helping to reduce anxiety and promote calm.

Most of the medications fall into one of three categories, depending on their specific biochemical activity. These categories are (1) selective serotonin reuptake inhibitors (SSRIs); (2) tricyclic antidepressants (TCAs); and (3) anxioselectives. The drugs are generally administered in a daily dosage, and it may take four to six weeks or so to determine whether they are effective.

Other categories of anti-anxiety drugs — benzodiazepines, for example — are administered on an as-needed basis. If, for example, a cat is burdened with separation anxiety, the owner administers the drug prior to leaving home. If the animal has a noise phobia, the drug is administered when a thunderstorm is about to strike.

Although any of the medications may have side effects, such as vomiting, diarrhea, constipation or urinary retention, a veterinarian can usually manage these problems by means of dosage adjustment. — Tom Ewing