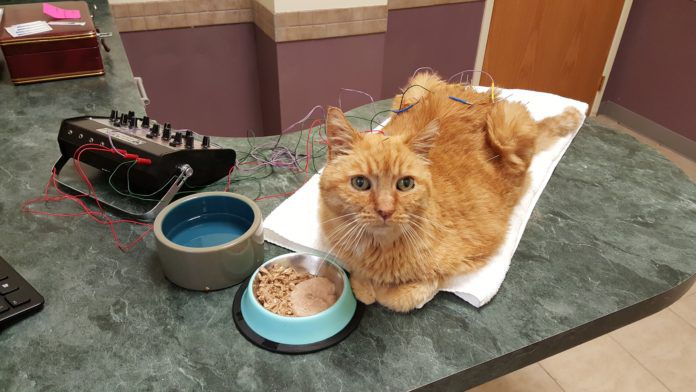 The art of traditional acupuncture traces back several thousand years to ancient China, and is one branch of traditional Chinese medicine (TCM). The other three branches are herbal medicine, food therapy and Tui-Na (medical massage). Although the ancient Chinese used veterinary acupuncture to treat animals, these were primarily valuable livestock such as oxen or the Emperor’s horses — not dogs and cats.

Today, veterinary acupuncture has become a widely accepted complementary modality that integrates TCM and Western veterinary Medicine. As people have begun searching for a holistic approach for their own wellness issues, they have also sought one for their pets. The use of complementary medicine in general, and acupuncture specifically, is a fast growing field. In 2015, the American Animal Hospital Association (AAHA) and American Association of Feline Practitioners (AAFP) issued joint guidelines for the management of pain in cats and dogs stating, in part, “There is a solid and still growing body of evidence for the use of acupuncture for the treatment of pain in veterinary medicine to the extent that it is now an accepted treatment modality for painful animals.”

Pain medicine specialist Alicia M. Karas, DVM, MS, DACVAA, an assistant professor at Tufts Cummings School of Veterinary Medicine, says, “According to traditional Chinese medicine, disease is considered an imbalance in the body, and diagnosis is a search for patterns that predispose an individual to that condition. The imbalance is often either a disruption in the flow of “Qi” (pronounced “chee”) or an excess of Qi. Qi is energy that moves through the body along meridians. Meridians are mainly paired pathways (mirror images, right and left) that run along the limbs and body that correspond to the organs. Along the meridians are acupuncture points, or acupoints. Acupuncture is the insertion of hair-fine needles into the acupoints; manipulating the needle at these points is said to restore the flow of Qi which restores balance in the body, promotes healing and relieves pain.”

The benefits for cats
You may flinch at the idea of sticking needles in your cat, but most cats tolerate it (although some may be less than completely willing). Amelie Hatfield, DVM, at Cat Hospital of Portland in Portland, OR, says that those cats who tend to be stressed by handling, or are unable to relax in a sitting or lying position, may be less successful candidates for acupuncture treatment.

“Almost every acupuncture plan can be modified to accommodate the patient,” says Dr. Hatfield. “For example, we may choose not to use dry needles, but instead use a tiny syringe to inject certain acupoints with vitamin B12 — a process called Aquapuncture.”

A modification that Dr. Karas was taught is called the “Flying Needle” technique in which she palpates the desired acupoint and pops in a needle really fast. “Ordinarily, I palpate a spot, put the guide tubes for the needle down and then introduce the needle,” she says.

For cats that get too stressed to ride in the car for the trip to the clinic, the option of in-home veterinary acupuncture sessions is now an option offered by many mobile veterinarians.

However, neither Dr. Karas nor Dr. Hatfield recommend sedating a stressed cat for acupuncture treatments — and they actually consider it to be counterproductive. “The process relies on stimulation of the nervous system, so sedating that nervous system may not yield favorable results. And it is still unknown whether certain chronic drugs like gabapentin interfere with response to acupuncture,” says Dr. Hatfield.

Acupuncture is widely used for pain control, and both Dr. Karas and Dr. Hatfield utilize it to help manage chronic pain associated with musculoskeletal diseases, like arthritis. Many conditions respond favorably to acupuncture, including constipation, decreased appetite, chronic kidney disease and liver disease, says Dr. Hatfield. She also says that acupuncture is not effective at managing acute medical conditions, although it can be used as a complementary treatment to Western medicine.

What to expect
A veterinary acupuncture appointment can take anywhere between 30 to 60 minutes. First, the client will answer questions about the cat’s lifestyle, habits, diet, etc. explains Dr. Karas. Typically, the needles initially stay in place for 10 minutes, and gradually up to 30 minutes, says Dr. Hatfield. Because the needles are so fine —smaller than the hypodermic needles used to draw blood — most cats don’t react to the slight initial prick, and many fall asleep during the session.

Some clients see improvement with their cat within 24 to 36 hours, and Dr. Karas always tells clients that their cats may appear tired during the first day. This is because of the release of endorphins — the body’s natural painkillers — and other neurotransmitters that might have an effect on pain in the brain. She says this is like a “euphoric wipeout” and likens it to us having gotten rid of bad headache. Dr. Hatfield says, “This is normal for Chi stasis — it takes energy to move energy.”

Acupuncture isn’t an overnight remedy, and some conditions will require numerous sessions, usually three or more. And the management of certain chronic conditions may need to continue a lifetime. The sessions are generally scheduled one to two weeks apart. “Acupuncture is cumulative; it depends on what you’re treating, and you need to be realistic about potential failure,” says Dr. Karas. Dr. Hatfield expresses a similar opinion and explains, “If a client hasn’t seen an improvement within three sessions, I’m usually doubtful acupuncture will help much more.”

The risks to consider
According to Dr. Karas and Dr. Hatfield, the risks associated with veterinary acupuncture are minimal. For instance, acupuncture should not be used in the area of a tumor because the tumor may grow if stimulated. Some animals may try to lick out the needles if not watched, and acupuncture should never be used on a pet with a fever or infection because it could spread the infection. Additionally, acupuncture shouldn’t be used on pregnant patients because stimulation of certain points could trigger uterine contractions, and there is the very rare possibility of provoking seizures in an epileptic.

“The risk of any complementary therapy is that if you fail to use a (Western medical) treatment that you know is effective, then you fail to adequately resolve the disease. For example, if an animal has a severe infection and the practitioner uses acupuncture instead of antibiotics, you will likely harm the animal by having an infection that worsens,” says Dr. Karas.

Requires a license
Veterinary acupuncture is considered medical treatment and can legally be performed only by a licensed veterinarian, explains Dr. Karas. “However, acupuncture is something of an art, in my opinion.”

“Acupuncture doesn’t work in everyone or every animal, but it is unlikely to cause any harm — and there are times when you can’t fix things any other way. I believe the body wants to heal itself, so you have to give it the conditions to do so. I feel that’s where hands-on physical manipulations can be a way to fix things,” says Dr. Karas.

According to Dr. Hatfield, “An extremely important factor is feeling you have a rapport with your vet, your vet is approachable, gentle — and listens well!” says Dr. Hatfield. — Ramona Marek Ms, Ed.