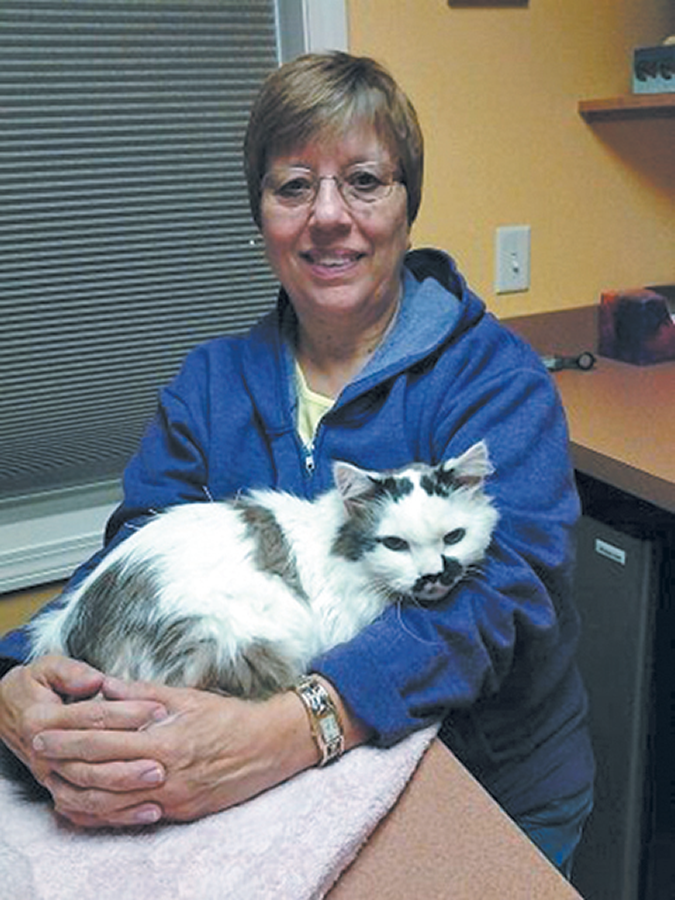 Acupuncture treatment, by all accounts, has had significant effects on cats suffering from musculoskeletal pain and nausea as well as various side effects of chemotherapy. Tufts veterinary school graduate Karen Fine, DVM, who practices in Massachusetts, describes one cat who was over-grooming herself to the point that she had hair loss. But after a few acupuncture treatments, during which Dr. Fine inserted a number of thin needles in her skin and left them there for 20 minutes, she started licking less, and her hair started growing back.

Even more pet insurance companies are offering reimbursement for acupuncture treatments these days.

Yet for all the stories of healing and pain relief, pure scientific proof for acupuncture is lacking. It’s virtually impossible to conduct placebo-controlled studies with some cats getting real acupuncture and some getting sham acupuncture. Even needles inserted into the “wrong” spots might have some effect.

So how might the ancient practice of acupuncture provide an effect that can’t be proven by Western standards?

The way acupuncture is thought to work

In traditional Chinese medicine, there are 12 meridians, or channels, in the body that a veterinarian certified in acupuncture tries to influence. “You can’t find these channels by dissecting the body,” says Dr. Fine, who is certified in acupuncture treatment by the International Veterinary Acupuncture Society. “Western medicine says that’s crazy — they don’t really exist.” Yet studies have found evidence that the channels have different electrical properties. Thus, when a doctor places an acupuncture needle into a channel, she is promoting a stimulation response so that nerve impulses travel up to the brain and then back down to the tissues she wants to affect.

Dr. Fine isn’t surprised. “We learn when we study acupuncture that something’s out of balance in the body of a sick cat, and we’re trying to restore that balance by nudging blood flow and nerve impulses in specific directions,” she says. “Acupuncture actually sets off an endorphin release,” she adds. “That helps a cat feel better in itself. And if the pet feels better, he can eat a little better, be a little more active. So even if you haven’t cured the problem, you’ve helped reestablish the cat’s quality of life and helped him fight his illness a little better.”

Choosing a veterinarian with acupuncture certification

Most veterinarians trained in acupuncture receive certification either from the International Veterinary Acupuncture Society (IVAS.org) or the Chi Institute (tcvm.com). While neither is equivalent to board-certification by the American Veterinary Medical Association, both require intensive course work along with hands-on, real-life practice.

Any veterinarian who practices acupuncture on your cat should apply it in conjunction with, not instead of, western medicine. No vet worth her salt would say you should use acupuncture to the exclusion of all the proven medical tools at our disposal.

Both the organizations listed above can point you to an acupuncture-trained veterinarian in your area.

When an ultrasound revealed in 2013 that Helen Christine Bibby’s cat, Carlton, had severe kidney disease, his veterinarian told Ms. Bibby that in all likelihood her pet’s life would be foreshortened. Desperate, she tried acupuncture treatments with veterinary acupuncturist Karen Fine, DVM. Within a couple of months, “he started eating better, became much more lively, and started playing again,” Ms. Bibby reports. Evidence is lacking that acupuncture can directly heal a diseased internal organ like a kidney, but if it makes a sick animal feel better to that point that it results in improvements in appetite and activity, it can contribute to both a better quality and quantity of life. Carlton went on to live five more years.

The cost of the treatments went down considerably because while he started with one treatment a week, he was able to taper off to one a month. That often happens, bringing owners who don’t have health insurance from spending hundreds of dollars a month to less than $100 a month.

“Not every cat is a good acupuncture candidate,” Dr. Fine says. “The needles going in is not the issue. It doesn’t hurt. Some cats, there’s just no way they’re going to stay still.”