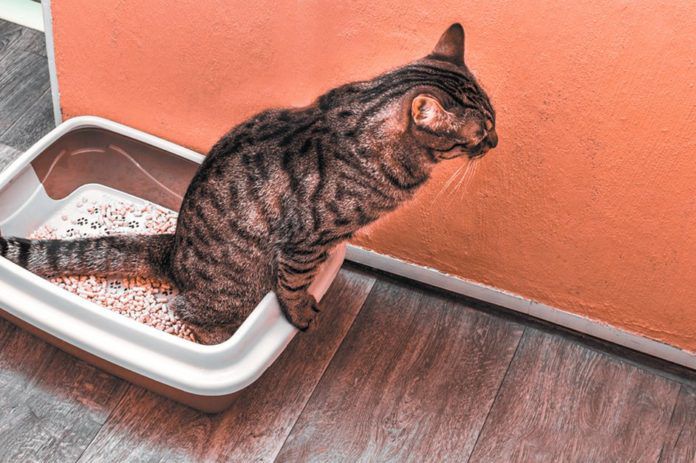 Has the litter box remained dry over the last day or so, with no clumps forming no matter how hard your male cat tries to “go?” Get him to the veterinarian — now.

He has a form of FLUTD — feline lower urinary tract disease. In this case, the disease presents as an obstruction at the tip of the urethra, which is the tube that passes urine from the bladder through the penis so it can leave the body. If the obstruction blocks the passage of urine, the cat’s body builds up toxins, which can lead to death within days.

The obstruction is usually plugs of mucus mixed with minerals and dead cells, or stones made of calcium oxalate or magnesium ammonium phosphate. If the obstruction is made of stones, it’s more of a fine grit, like packed sand.

Unfortunately, the problem is not rare. At Tufts’ Foster Hospital for Small Animals, “we easily get one or two cases a month,” says John Berg, DVM, editor-in-chief of Catnip. “Sometimes more.”

Making a diagnosis is “not a challenge,” Dr. Berg says, “not only because the owner reports that the cat has not been able to urinate, or urinate productively, but also because the bladder feels huge and hard upon palpation.” (Palpation is the medical term for feeling the body with the hands during a clinical exam.)

To solve the immediate problem, the veterinarian will pass a catheter to relieve the obstruction. A stiff piece of tubing called a tomcat catheter is passed through the penis up into the bladder. The procedure almost always requires sedation or even general anesthesia.

Once the obstruction is relieved, the doctor will replace the tomcat catheter with a softer one. The cat will remain in the hospital for a day or two to allow any swelling in the urethra to subside and also for observation. But even if everything turns out okay, which it almost always does, the owner has to make a critical decision.

Cats that have obstructed once are at relatively high risk for obstructing again. That’s why veterinarians often recommend surgery to reduce the risk. The operation is called a urethrostomy, and it involves removing the cat’s penis and creating a newer, wider opening further up the urethra to give the cat what is essentially female anatomy on the outside of his body.

The procedure is a significant one, but cats don’t feel disfigured. They’re happy to keep being fed and to chase objects on a string. It’s clearly a much better alternative to recurring episodes of life-threatening obstruction.

Different vets have different thoughts about when to recommend the operation. In some instances, the obstruction “is like concrete,” according to Dr. Berg, and can’t be relieved with a tomcat catheter. If that’s the case, the operation has to be ordered to save the cat’s life.

Preventive surgery is sometimes warranted if a cat obstructs three times, according to Dr. Berg. “Three strikes and you’re out,” some veterinarians say.

“Personally,” Dr. Berg opines, “I feel that any cat who obstructs once is at a minimum a surgery candidate, especially a cat who is young or middle aged. If you take the cat home and he obstructs again on the weekend or when you are away on vacation, he will have a life-threatening problem with perhaps no possibility of treatment.

“The owner’s lifestyle is another major consideration,” Dr. Berg points out. If the owner is a hedge fund manager who works long hours and travels extensively, she may not be present when her cat obstructs, and a preventative surgery makes a lot of sense. On the other hand, if the cat is owned by a highly attentive elderly couple who is home much of the time, a urethrostomy may be unnecessary.”