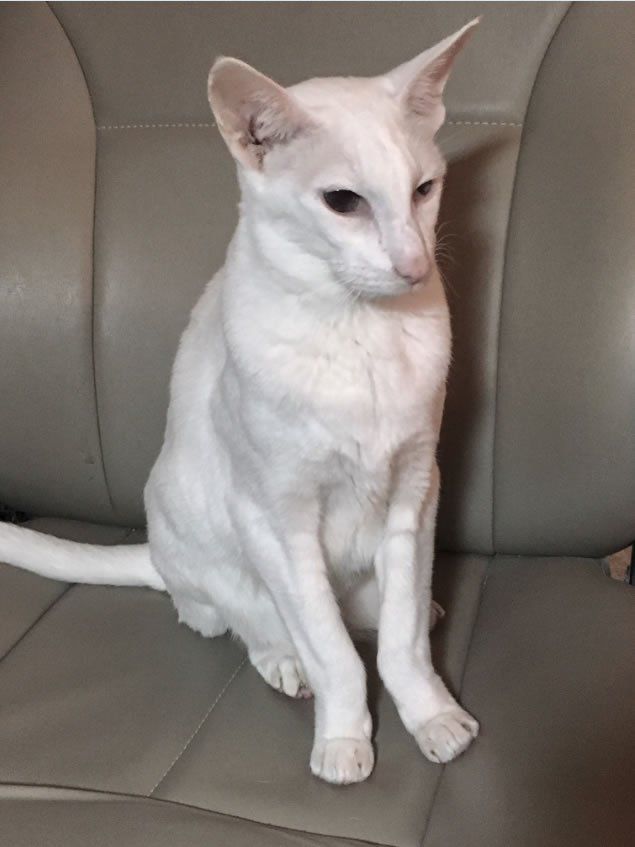 I wasn’t particularly concerned when our veterinarian told me that it was time for us to start administering subcutaneous fluids to Sir Hubble Pinkerton, our 15-year-old white Oriental Shorthair. Many years ago, I had successfully treated a cat with chronic kidney disease with no problems at all. Because Sir Hubble is a very easy-going and cooperative cat, I assumed that it would be a piece of cake. My assumption was totally wrong.

The first day, we brought Sir Hubble into the bathroom, hung the bag on the shower curtain rod and my husband — who is proficient in giving cats injections — gently stuck the needle into Sir Hubble’s scruff and started to run the fluids. My gentle cat tried to bite and scratch me, dashed out of the bathroom and left my startled husband “holding the bag” — with fluids dripping everywhere. We tried it again, but Sir Hubble wanted nothing to do with being hydrated. Even though we knew that our cat desperately needed this treatment, we both felt that it would be impossible for us to handle him.

In a panic, I immediately called a vet tech to ask if she could help us. We worked out an every-other-day schedule. After two weeks with her help and guidance, my husband was able to confidently administer the fluids himself while I kept Sir Hubble calm. I then joined an online CKD support group where I learned about using an IV pole, how to warm the fluids and the appropriate type of needles and other tricks to make hydrating him a breeze.

We also learned that a cat’s temperature is much higher than room temperature. So we warmed the fluid bag in a bowl of hot water to around 100 degrees, which made hydration more comfortable for him. (A microwave oven should not be used to warm the fluid bag because microwaves heat fluids unevenly.) It’s a snap to take the bag’s temperature with an infrared baby thermometer. We bought ours on Amazon.com.

I started plying him with slices of roast beef or turkey while he was being treated. The entire process now takes about four minutes since he has become so cooperative.

Sir Hubble Pinkerton now seems to know when it is time for his treatment. In fact, he jumps up on the dining room table to wait for his fluids and to get his favorite treat. CKD is a progressive disease for which there is no cure. However, the treatments and supportive medications have been immensely helpful. His energy, appetite and spirit have significantly improved and his quality of life has been great. — Jo Singer