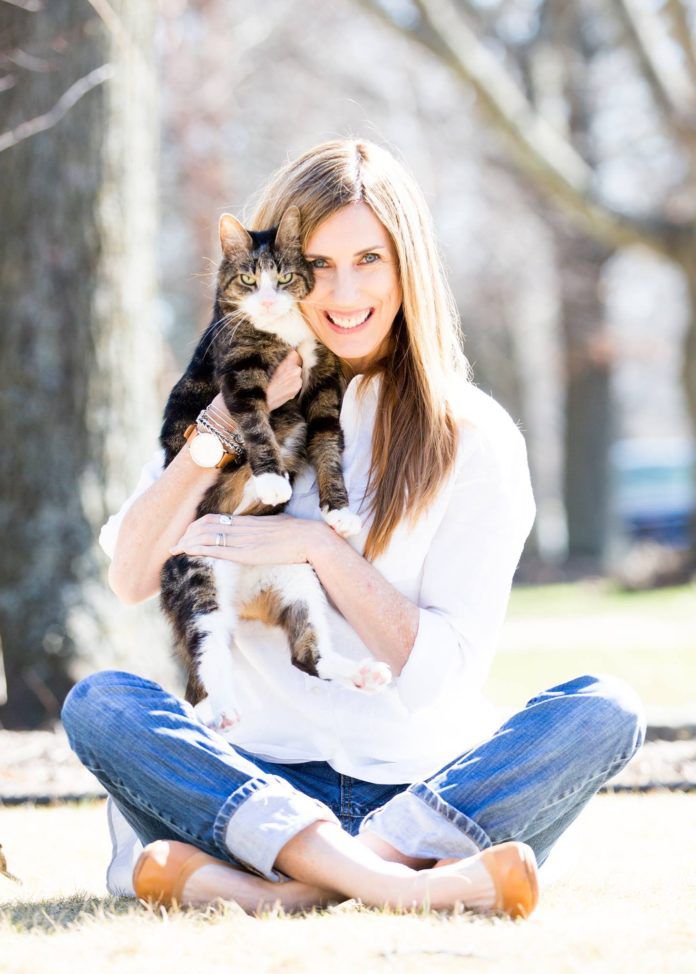 Cat behavior consultant Sally Williams and her husband, Scott, share their home with four male cats of varying ages: Jonesey, Marlin, Finnegan and Brodie. In 2015, Brodie began having sneezing spells, which could have been anything — but then the sneezing became persistent and tinged with blood. Cancer became an immediate concern. In June 2015, 12-year-old Brodie was diagnosed with adenocarcinoma, nasal cancer, and treatment started in July.

Catnip: What was you initial feeling when Brodie was diagnosed with adenocarcinoma?

Sally Williams: My first thought was, “I’m not ready to say goodbye” — but that very quickly became “How do we beat this?” and “What would Brodie want us to do?”

CN: How did you make your decision to treat Brodie with radiation therapy?

SW: We were really lucky to have such an amazing doctor, Dr. Dustin Lewis, at Red Bank Veterinary Hospital, in New Jersey, who talked us through all of our options while he got to know Brodie. Having him get to know Brodie helped us to make the decision based on what would be best for Brodie, including his overall personality and temperament. Brodie is a “bullet proof” cat, our friendliest and also the scrappiest; he’s top cat and keeps everyone in line. Before we even talked about the financial details, we had to make sure the treatment protocol was best for Brodie.

CN: What was the duration of treatment?

SW: We chose to do the full course of radiation, which was four weeks. The course was going to give Brodie the most time post treatment, and that was what we felt was best for Brodie. He had a tumor growing for a while and we wanted to give him as much time as possible to enjoy life.

CN: How did you feel during and after the treatment?

SW: In the beginning, I felt great and so did Brodie. We had a rough patch halfway through the treatment, and after, when he stopped eating. As the tumor was dying, he became so congested he couldn’t smell so he wouldn’t eat. At this point we opted for a feeding tube because the radiation was working. This part was harder than the radiation for both of us. It wasn’t easy —it required keeping a schedule, measuring and using a blender, getting the right consistency and feeding by syringe four times a day. We did this for four long months, with complications along the way, until one day I came home to find he had pulled out the feeding tube. A week and half later he started eating. He reminded us that he was in charge and not ready to say good-bye.

CN: What is Brodie’s prognosis, what kind of care is he receiving now and how is he feeling?

SW: Basically the radiation shrinks this kind of cancer, but it can grow back. Thankfully it is relatively slow growing and he has the gift of time. Overall, he is feeling great, he’s as playful as ever, loves everyone and would prefer to be on a lap as much as possible! He gets regular checkups and has some symptoms coming back, but we are able to treat them. He has a team working with him and currently uses a combination of traditional medicine, Chinese, herbs and acupuncture. This has been an incredible journey and we are not near the end.

CN: If you knew beforehand what you know now, would you still opt for the radiation therapy?

SW: Right now I would say yes, but a few months back, I might have hesitated. As I said, the feeding tube part really threw us for a loop. That was the most difficult part because it was unexpected. If radiation had been the only thing he had to deal with, then my answer would have always been a resounding yes.

CN: Do you have any words of wisdom for people whose pet may have cancer?

SW: That’s a tough question to answer as it’s so different for everyone. All cancers are different, pets’ personalities are different — and money, unfortunately, does come into the decision making process for some. I guess I would say no matter what you decide, enjoy the time you have remaining and shower your pet with love.

CN: How has this journey changed you?

SW: During his radiation, I needed a place to put my energy and to do something positive instead of focusing on my fears. I met so many amazing people with pets fighting cancer and we formed this special bond. Out of all of this came The Brodie Fund. Through this fund we try to help families in need pay for cancer treatments for their pets. We saw people at the hospital who were faced with choosing not to treat their pet because they couldn’t afford to, and that was heartbreaking. We are still in our infancy and only work with certain veterinary hospitals, but we are planning to grow as donations grow. We have begun the process and we will soon become our very own 501c3 charitable organization. The last dog we helped was 13 years old, like Brodie, and after surgery he is now cancer free. That’s what it’s all about for us.

To learn more and to donate, visit: www.thebrodiefund.org