Home Ask the Doctor Why does my cat seemingly bite me out of the blue?; some...
Print
Email
Facebook
Twitter 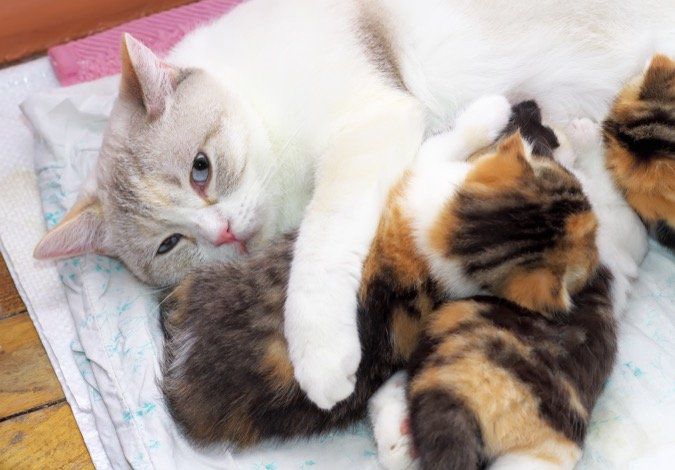 Why does my cat bite me?

Q: My family adopted Boo when he was eight weeks old. He was found when he was about two weeks old in a litter abandoned by their mother, and the kittens were taken to a local rescue organization. A volunteer agreed to foster the kittens in her home, and she bottle fed them until they could eat solid food.

Overall, Boo is a wonderful cat, and he is particularly bonded to me (he has a more distant relationship with the other members of our family).

The problem is that he will occasionally — and seemingly for no reason — bite my arm. This is serious for me because I am on blood thinners, so I am worried about my health. I would like to understand why Boo bites and if there’s an appropriate way to train him not to do that. Any suggestions would be greatly appreciated.

A: Dear Suzanne: Hand raised kittens are at higher risk for biting behavior, most likely because human care givers are not able to provide the same type of feedback about biting and other interactions that a queen can provide to the kittens.

That being said, there are many reasons why a cat may bite an owner. If it occurs during petting, it may be petting aggression, which is best avoiding by limiting petting to a cat’s head and neck area, keeping petting sessions brief and stopping the petting session as soon as the owner senses that the cat is no longer content. A twitching tail is often a good indicator that it’s time to stop.

Attention-seeking biting can also occur with young cats. It is likely to occur when an owner is involved in another activity and ignoring the cat. The cat quickly learns that nothing gets an owner’s attention faster than a bite! In this case, the best approach is to increase environmental enrichment for the cat and be sure to set aside time for regular interaction, even on busy days.

Young cats may also engage in play biting. If the bites occur when the owner is moving around and is accompanied by pouncing-like behavior, play may be the cause. Play biting can be reduced by increasing enrichment and predatory play opportunities for the cat with fishing type toys. Puzzle feeders may also help the kitty to engage in more appropriate hunting and foraging type behaviors.

Some cats may bite their owners to demand a particular response. Cats may bite to guard resources such as the bed, or to hurry their owner to prepare food. In such cases, it is best to avoid triggers of aggression, for example, by keeping the bedroom door closed, and to teach the cat to obey a simple command such as ‘sit’ before providing valued resources such as meals.

Cats with this type of aggression can often benefit from clicker or other positive reinforcement training.

Why do my cats fight?

Q: I am at my wits’ end. My five-year-old male, neutered indoor-only cat is very timid and shy. We adopted him when he was about seven weeks old. Two years ago, we rescued a stray — a spayed female we believe is about three years old.

My problem: They do not get along at all. When they are together in the house, all they do is fight, hiss and growl at each other. Nothing I have read anywhere seems to help. The female currently lives on our screened-in back porch, but I would love to have them both in the house. Any suggestions would be most appreciated.

A: Dear Dinah: The problem you report — territorial aggression between cats — is an extremely common one that is rooted in the way cats regard each other and the territory in which they live. Some cats are naturally friendly toward each other and seek each other out to spend time together.

Other cats are indifferent toward each other, but can co-exist peacefully within the same “social space.” But then again, there are cats who are naturally opposed to each other who will conscientiously avoid each other or fight.

In nature, one or other of these latter cats will wander off or be driven away and the problem resolves. In the domestic situation, this is not possible because our cats are forced to co-exist. Not appreciating the subtleties of cat personalities and societies, well-intentioned owners frequently add another cat to their home and are surprised and dismayed when the two cats do not get along, as is happening in your situation.

There are programs in which such feuding parties are separated and gradually reintroduced under pleasant circumstances. But sometimes — even when medications are employed to facilitate the process — success is far from guaranteed. Often times, the best solution is to keep the cats separate or to find a home for one or the other cat.

In your case, there is one trick you might try before you reach any of these conclusions and that is to apply Boarmate™ — a pheromone derived from the male hormone testosterone — to your male cat’s rump daily to give him an edge.

Boarmate™, available online as a farm animal product, can be sprayed on a cloth, which is then wiped on the cat’s rump. The idea is to make your male seem like a super male, one who generates great reverence and respect in the olfactory eyes of your female cat. Results are not guaranteed but, if they are going to occur, they occur quickly. I wish you luck.