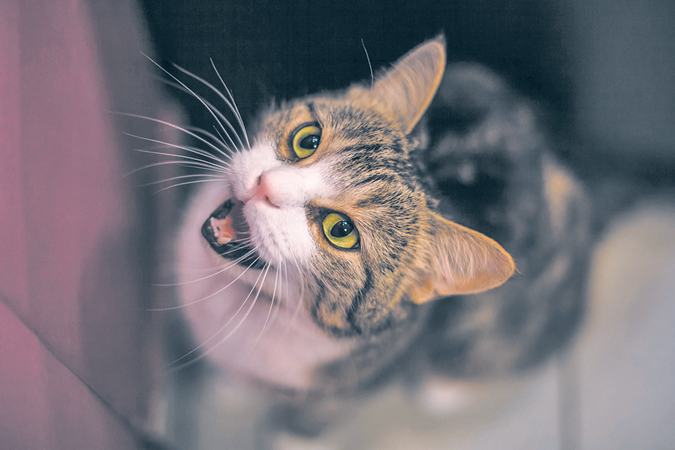 Adult cats don’t meow at each other. A kitten will meow to let its mother know it’s hungry or cold, but once it is weaned, it will no longer meow to communicate with those of its own species.

As you no doubt know, however, cats do meow to people throughout their lives. Why? Because they’re smart. They know that meowing gets them what they want, or need. That could be attention, food, even medical care. Also, as cats mature, they can develop an overactive thyroid or kidney disease, and either one can result in a lot of meowing.

Sometimes cats meow when they’re old, the ASPCA points out. They may have senility, which can be disorienting and prompt them to vocalize. Finally, cats who are allowed outside as they transition from being a stray to a house pet will often meow to be let out — or back in.

Is the meowing excessive? That’s entirely up to you. Some cats will meow to greet people when they come home, or to elicit attention — stroking, playing, and the like. And cat parents may find that adorable. But a cat who meows any time you walk into the kitchen or who wakes you early in the morning with vocalizations might not be viewed as so precious. Of course, some cat breeds are “built” to meow. Siamese, for example, are prone to vocalizing more than a lot of people find pleasing, or acceptable.

Training your cat to talk less

Before you embark on a behavior program to help your cat tamp down on what feels to you like excessive meowing, take her to the veterinarian to rule out any medical issues. Many different illnesses can cause your cat to feel unusually hungry, thirsty, restless, or irritable, and that can lead to extra vocalizations that can be dealt with by treating the disease.

Once a medical condition has been ruled out (or dealt with), look at the behavioral reason behind the meowing and respond to it accordingly.

Greeting. Some cats meow to say hello when people come home. There’s probably not much you can do about that. But why should you? Who doesn’t want their pet saying how happy she is that you have come back?

Attention. If it’s clear that nothing’s wrong — the water bowl’s not empty, and your cat’s not locked in a closet — then she is telling you she craves interaction in the form of some play time or stroking. If the meowing for this reason is over the top, train your cat that it will not get her what she wants. How? By completely ignoring it. At some point she’ll stop for a moment, if only to catch her breath. Then give her the attention she desires. Consistency will train her that excessive meowing will only backfire and that not overdoing it will get her what she’s after.

Loneliness. If your cat spends an awful lot of time by herself in the house, consider paying a pet sitter to come at some point in the day to play with and pet her.

Food. This can be a tough one. But stop feeding your cat when she meows so she learns it will not work. Feed her only at prescribed times, or from an automatic feeder so that she separates the notion of getting food from the notion of you giving it.

Hunger. This can be different from just feeling like noshing. If your cat is on a weight-loss plan, she may truly feel hungry — and let you know it by vocalizing. If the meowing is more than seems reasonable, talk with the veterinarian about high-fiber foods or high-fiber supplements that can help her feel satisfied with her reduced portions, the ASPCA suggests.

Transitioning from stray to house pet. Once you make the decision that your cat is not going to go outside anymore, she may meow more than ever. Stay the course. It will be difficult, but she’ll finally give up. (Make sure to spend plenty of time interacting with her and feed her from food puzzles so she learns that being inside is okay.)

Whatever you do, never yell at your cat or punish her with a spray bottle for meowing a lot. That will not moderate her behavior over time. It will only serve to fray the bond between the two of you.