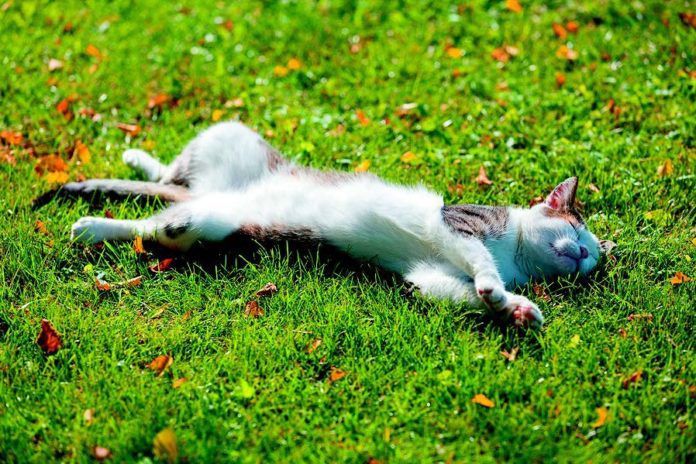 Zooming. Splaying. Kneading…Let’s face it: cats can be weird. Or seem weird, if you don’t understand why they engage in certain behaviors. In this article, we demystify some of their so-called oddball antics.

Zooming around the house. Many house cats are just plain bored, which means they have a lot of pent-up energy. Keep in mind that cats have been domesticated only half as long as dogs, which means their primal instincts to hunt and roam are still very much intact. Combine that with the fact that a lot of cat owners treat their pets as pretty ornaments rather than as sentient beings needing activity and interaction, and you’re likely to see felines suddenly jumping off the couch and running around like banshees. And they can run! Some cats are able to ricochet around the room at a speed of 31 miles an hour — as fast as a car going the neighborhood speed limit.

Resting splayed out in an “unladylike” position. Does your cat ever lie kind of upside down, legs apart? Take it as a compliment. It means she feels safe and trusting in your presence and doesn’t see a need to guard her body.

Kneading you. There’s a reason most cat owners enjoy when their pets knead them (as long as they keep their claws retracted). They can sense how calm their cats are at those moments. Indeed, cats often purr during the process. It’s not surprising. Newborn kittens will press against their mother to stimulate milk flow, and your adult cat might feel soothed by this vestige of the bond with her mother.

Loving small spaces. Most cats are free to snooze or otherwise relax anywhere they want — on the couch, on the bed, in your favorite easy chair. Why, then, do so many cats curl up in tight spaces like small cardboard boxes in which a gift was wrapped? A confined space makes them feel secure.

Failing to cover her poop. If there’s no medical issue, your cat’s failure to brush some litter over her waste may be a signal her “bathroom” is not to her liking. Maybe she doesn’t like the texture or scent of the litter or something about the box itself. Resolving the issue might require adding a litterbox to your household. A good rule of thumb is to have the number of litterboxes equal the number of cats in your household, plus one.

Ear twitching. This is often due to feelings of agitation or disquiet. Don’t get in her face. Just be there for her. If you remain calm and steady, she will quickly reach emotional equilibrium.

Drinking from the faucet. We can’t say for sure why some cats like to do this (some will even jump into the sink to give you the not-so-subtle message to start the flow). But some behaviorists believe that in the wild, cats seem to know instinctively that drinking running water is safer than drinking standing water, which may have collected bacteria and other parasites.

Sitting on something you’re trying to look at. Whether it’s a newspaper or a book you’re trying to read, or your computer keyboard, your cat knows that if she gets between you and the object you’re interested in, she will become the object of interest. Cats might also love sitting on laptops because of their warmth. Cats tend to like the ambient temperature up to 20 degrees warmer than we do.