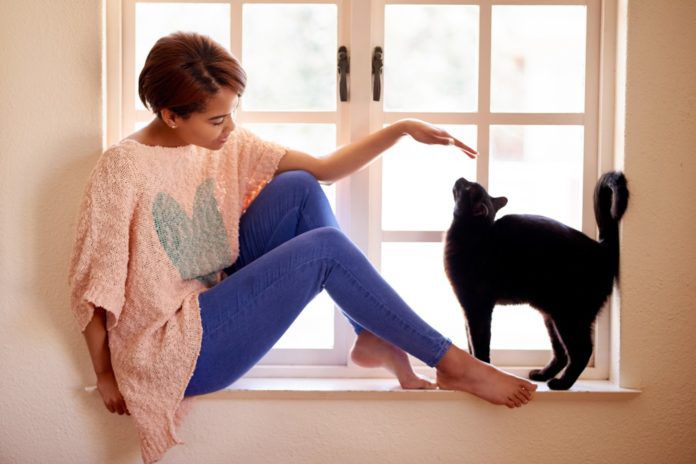 Dr. Doolittle would be intrigued. Can we actually use American Sign Language to talk to the animals, and they to us? Videos that have gone viral would suggest yes. Whether it’s cats seated attentively in a row, responding to American Sign Language taught by their human “mom,” or a polite cat gently touching her owner’s arm as he’s eating and then placing her paw to his mouth to indicate that she wants some of the food, the possibilities such images suggest leave us filled with wonder.

Alas, as it turns out, it is only the exceptional cat who can sign, and only in a rudimentary way, according to Sandra Inzinga, president of the Connecticut Association of the Deaf. For one thing, cats don’t have our long digits or the same degree of maneuverability of their paws as we have of our hands. Moreover, cats don’t perceive or process language the way we do, whether it’s spoken or signed.

Rather, cats respond to American Sign Language’s combination of facial expressions, hand movements and overall body movements in much the same way they parse out cues from vocalized speech, picking out only what they deem pertinent. That is, they do not think in sentences.

For them, words are simply signals about what is available to them or what you want them to do. There is little difference between a cat’s interpretation of American Sign Language as it naturally occurs in deaf households versus in homes where words are vocalized. “Since no voice is provided, they recognize sign commands,” says Ms. Inzinga.

So is the whole idea of teaching a cat to recognize American Sign Language pure folly? Not at all! There are a number of reasons why teaching cats some basic signs can be beneficial. One is the gratification of time you spend with your pet on a shared project, and the excitement of that eureka moment when a new sign is learned.

In addition, because there are cats who are already deaf or hard-of-hearing — or may well get to that state in their older years — having sign language as the means of communicating can help to keep them connected to us.

“I love cats, and it’s a joy for me to communicate and sign with them,” says Kim Silva, a woman seen in videos gone viral signing with her cats as they sit in a row on her kitchen counter. Newly retired from her teaching position at the American School for the Deaf, and deaf herself, Ms. Silva had the time to devote herself to teaching her hearing cats to sign as part of her preparation for the arrival of a deaf cat that she adopted from a Texas rescue organization.

Mrs. Silva began her work using food as motivation. Holding treats in her hand, she signed ‘more’ so that the cats would understand that there were more snacks to be had. Once the connection between the ‘more’ sign and its meaning was made, the lessons expanded. Walking backward from her cats, Mrs. Silva would sign the name for various objects such as ‘chair’ or ‘table,’ increasing her cats’ vocabulary in this way.

“As far as I know, I am the first deaf person who has taught cats to learn ASL, and I have read that ASL linguists have not tried this with cats,” says Ms. Silva. The cats become used to doing certain tricks via their owners’ signing in order to receive treats, responding to ‘sit,’ ‘lay down,’ ‘shake’ and ‘dance.’ “I can go on and on with them and others can sign with them, as well, with the cats understanding,” says Mrs. Silva. When she signals ‘finish,’ the cats know that their learning session is over, and they’re free to go.

The cats respond in ways that show their individual choice in responses to signing. “I can sign ‘dance’ with Thomasina and Bambi will go round in circles,” says Ms. Silva. The cats, even her shyest, have also responded to learning sign language by interacting more with visitors, hovering to see if they will be signed with. And she feels that one of her cats is exceptional: She has learned to put her paw to her mouth — and then move her paw downward by her chest as a sign for ‘thanks’ once food has been served.

Sometimes Ms. Silva begins sessions by waving her hand if the cats are looking in her direction or stamping on the floor to cause a vibration that would cause the cats to look at her, at which point she signs ‘more’ and they come to her. At this time, Mrs. Silva’s cats respond to sit, stay, high five, shake, nap, circle (dance), can (for canned food) and finish. And the sessions are so enjoyable that her cats will sometimes pester Ms. Silva when she is busy with other things to get her to do some signing with them.

Not all cats will cooperate!

Signing does not appeal to all cats. Mrs. Silva has found that training sessions work well with kittens,, though one of her cats, Bobcat, learned signing at age seven. But no matter the age or whether the cat is hearing or deaf, she must be food-motivated in order to focus long enough for the connection between sign and its meaning to be made. The end result, though, is that cats who have learned specific signs and respond to them are doing more than passively receiving vocal or signed speech in bits and parts that matter only in terms of the edible goodies they receive. Ms. Silva notes that once her cats learned to recognize sign language, they became more interactive in general.

“Once they’re using sign language, they’re able to use their senses — hearing and visual — at the same time, so that’s really stimulating to their intellect and they will pick up and watch for signs, making it much more meaningful to them,” says Ms. Silva. “If they were simply conditioned to respond, this would not change their personality as it does. It is fascinating to see that their personality changes and they can become very friendly, even if they’re older. I would like to see more people signing with their cats, who want to communicate but are unable to understand human speech.” — Constance Lindner