Home BEHAVIOR Stress: a Big Reason Your Cat May Be Urinating Outside the Box
Print
Email
Facebook
Twitter 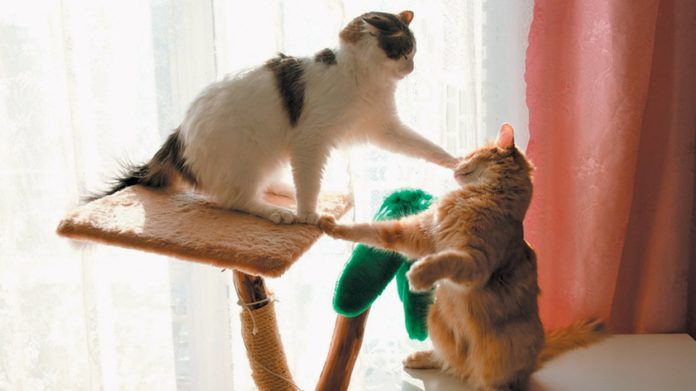 Last month we covered litter box aversion, one of the main behavioral reasons cats won’t “go” where they’re supposed to. This month we will cover another behavioral reason for a cat’s failing to urinate where she should — stress. It’s something to consider if your veterinarian says there’s no medical cause for the problem and if litter box aversion has also been ruled out.

Stress may actually be the most common nonmedical reason for a cat’s relieving herself where she shouldn’t. It tends to have one of three causes: difficulty with other cats who live in the house (social stress), separation anxiety, or boredom — the inability to express her natural instincts to hunt and forage for food.

Social stress. “Cats who aren’t getting along, or social stress, is one of the really big triggers for stress marking,” says Tufts animal behaviorist Stephanie Borns-Weil, DVM. “Maybe it’s not outright fighting, but a feeling of unease between resident cats.”

Solution. Give cats in the home their space. “It can help to create an atmosphere of plenty,” Dr. Borns-Weil says. “Cats are avoiders, but people like to consolidate their animals’ resources, feeding them next to each other, giving them one water bowl to share, one window seat to share, two litter boxes side by side. Therefore, in order to meet their needs, they constantly have to be in each other’s face.

“If instead you have litter boxes spread throughout the house and food bowls far apart, they don’t have to cross each other’s path. Also give them one-seat resting spaces,” she advises, “so they don’t have to share lounging space. And engage in separate play time with each of them rather than together.

“If there’s frank aggression between two cats or one is hiding out of fear, the best approach is to separate them completely and reintroduce them very gradually,” the doctor says.

Separation anxiety. Cats have social needs, too. Some cats will urinate outside the box in their owner’s absence or right when the owner comes back home. Although they are independent, they may not like being left completely alone.

Solution: Certain cats may need someone to stay in the house with them for an hour or two rather than being left by themselves all day. Enriching the environment while you are away will also help. Try putting out food puzzles and interactive games — things to keep a cat busy while by herself. You can also put a bird feeder right out the window so the cat has something to look at. But for many cats, there is no substitute for taking the time to play with her when you are at home. That can help alleviate separation-related distress.

Boredom-related stress. “There’s not a lot of difference between house cats and their wild ancestors,” Dr. Borns-Weil says. “Wild cats forage and hunt for food much of the day, roaming their territory. Pet cats need the same outlet, but we keep them indoors and give them two seconds of food to eat, and they’re bored the rest of the day. That lack of stimulation is extremely stressful.”

Solution. “You want to make sure your cat has sufficient environmental enrichment,” Dr. Borns-Weil comments, “tending to her need for exercise, for intermittent social contact, and for play. Feed her not in a bowl but with foraging toys so she can hunt and use her brain, and her natural instinct.”