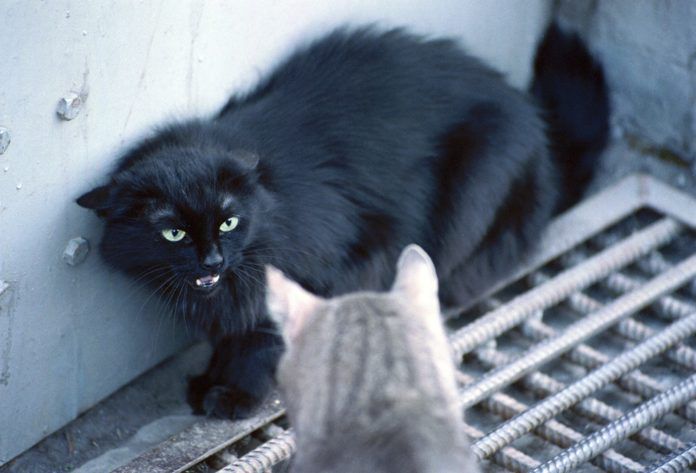 Cats can be really good friends,” says Nicholas H. Dodman, BVMS, DACVB, Animal Behavior Clinic Director at the Cummings School of Veterinary Medicine at Tufts University. “Two is company, and even three or more can get on.”

Experts agree that cats are social animals. In the wild, a solitary cat can survive, but as soon as there is enough food to support more than one, a social group will develop. “It’s good for social animals such as cats have the company of feline companions,” says Dr. Dodman. “Cats are capable of forming true communities.”

Not all cats get along, of course. The wrong match — or a mishandled introduction — can lead to aggression, creating a situation that is difficult and sometimes impossible to turn around. “If you adopt a cat that has an antagonistic personality, bringing him or her together with another cat can become not an enhancement, but deleterious,” says Dr. Dodman. “Things can go terribly wrong.”

In some ways, cats are like people. After all, we’re social animals too. “Yet no one would say, ‘Hey, you’re a human, you’ll appreciate if I move another human in with you,'” says Dr. Dodman. Like people, “you need to make sure cats are compatible before you bring them together as permanent housemates.”

There are two elements to a successful match: The personalities of the cats, and how you allow them to get to know each other.

When evaluating the personality of a cat, animal behaviorists may look at three personality traits that have been validated by research. These are the degrees to which a cat is alert, equable and sociable.

Alertness refers to whether the cat is active, curious and investigative — or not. Equable refers to evenness of mood, whether the cat is long-suffering and easy-going, or explodes on a hair trigger. When a cat is more equable, introducing a feline friend can be easier.

But the most important trait for bringing cats together is, not surprisingly, the sociable spectrum. “A cat who is friendly with both people and cats, warm and fuzzy, scores well in the sociability area,” explains Dr. Dodman.

Cats don’t have to be perfectly equable and sociable to become good companions, of course. But it certainly helps. If you’re adopting a cat, or getting one from a friend, take a good look to see if you can get a sense of how the cat or kitten rates on these traits — especially sociability.

Ask people who know about the specific cat’s behavior. If you have a cat already, you can even ask the shelter if you can bring him in in a crate, and let the new cat come close, perhaps in a harness, to see if they tolerate each other.

Once you have selected cats that you want to become friends, the next step is introducing them in the best possible way.

Sometimes you’re lucky and can bring home two cats or kittens that are already bonded. “If you see two in a shelter in the same cage, maybe brothers and sisters, and they’re living and purring together, you may be able to adopt them as a pair,” says Dr. Dodman. “I did that once with a mother cat and her daughter, who were already naturally bonded with each other.”

If that’s not possible, start slow:

Keep them in separate areas at first. You may want to keep the cats on either side of a closed (or slightly ajar) door, for example. “They can come close enough to smell each other, to be aware of the presence of the other cat,” explains Dr. Dodman. “Maybe through a crack in the door they can look at each other.” You may even want to feed them on either side of the separation.

Then you can proceed, either that day or the next, with a controlled introduction: Put one cat safely in a crate, and the other on a harness or roaming free. Or you can try putting both on harnesses and letting them explore each other’s presence.

Over the next few days — going as fast or as slow as you feel is right — start to introduce them to each other.

If there is occasional hissing, separate the cats for a longer period, and try a more gradual period of introduction.

Try to avoid a situation where there could be a brawl early on. A major standoff with an arching of the back, hair on end and claws outstretched may define the relationship irreversibly. “It sets back the relationship,” stresses Dr. Dodman.

“Territorial aggression is one of the hardest things to treat,” says Dr. Dodman. “It can be fixed, but it isn’t one of the easiest problems. You can separate the cats, and gradually re-introduce them. Sometimes medication can be used to facilitate introduction. The best you can hope for is that they are peaceful in the social space together — that they tolerate each other.”

When it doesn’t work

A more common outcome, fortunately, is two or more cats that create a society in your home. If you’re lucky, two cats may become mutually bonded, grooming each other, sleeping curled up together and in general being happy and content companions.

But cats don’t have to be soul mates to be good company for each other. Cats may establish a kind of hierarchical arrangement in which, for example, one cat gets the preferred sunny window seat in the morning, and then jumps down and the other cat can claim it.

“Even when one cat keeps his social distance from another, he may be quite happy to have the other cat wander around in the same room or the same house,” says Dr. Dodman.” — Bob Barnett