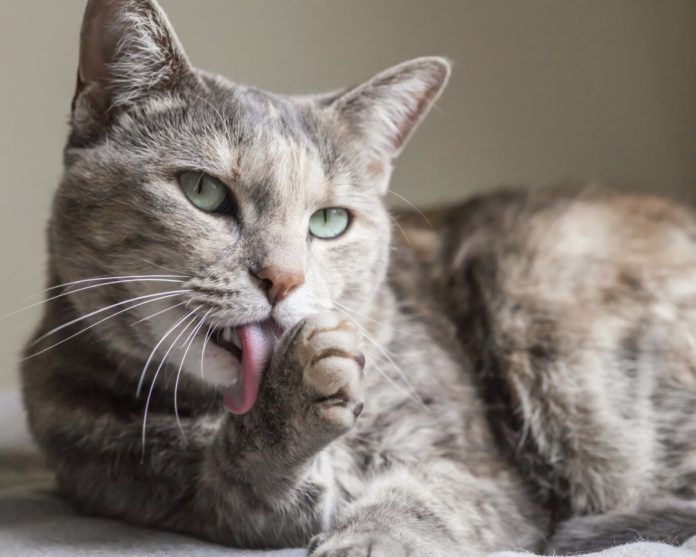 Any cat is apt to display alarming behavior now and then — gnawing at her fur with a vengeance, for example, or racing madly from room to room with no apparent objective. Such fleeting episodes are normal and should be of no concern to her owner. But if the behavior is observed several times a day or, more alarmingly, several times an hour, it is possible that the cat is manifesting an obsessive compulsive disorder (OCD).

According to Nicholas Dodman, BVMS, director of the Animal Behavior Clinic at Tufts, compulsive behaviors are those that are performed repetitively and mindlessly, with no apparent objective. Fortunately, this disorder is infrequently diagnosed in cats, he says. “OCD probably accounts for between two percent and five percent of a typical animal behaviorist’s case load,” emphasizes Dr. Dodman, “so it’s not common. But when it does occur, it can be a real issue.”

The manifestations of OCD range from excessive grooming and relentless pacing to aggressive chewing and even ingesting cloth, plastic and other inedible items. Any such behavior, if carried on over an extended period, is likely to be alarming and perhaps annoying to a cat’s owner. In some cases, however, the disorder can lead to severe health problems for the cat. At what point should an owner take a cat’s repetitious behavior seriously and seek veterinary consultation? “It’s a judgment call that’s really up to the owner,” says Dr. Dodman. “If you have a child who washes his hands without fail before supper or after going to the bathroom, that’s fine. But if the child washes his hands 30 times a day — or 100 times a day — you’ve got a problem. There’s a behavioral spectrum ranging from normal to dysfunctional, and this is as true for cats as it is for humans.”

A wide range of triggers

Triggers for feline compulsive behavior range widely, including, for example, a move to a new household, the arrival of another animal in the home or lack of adequate social or environmental stimulation. According to Dr. Dodman, feline OCD arises when a sensitive, indoor-only animal lives within a restrictive environment that places her in an ongoing situation of inner turmoil and conflict. Initially, the cat may respond to her psychological discomfort by displacing her frustration into some mindless, repetitive behavior.

Eventually, the amount of stimulation required to trigger the irrelevant activity may gradually decrease, and the cat may engage in the behavior in response to very modest levels of arousal.

The most commonly observed compulsive disorders in cats are psychogenic alopecia, which Dr. Dodman describes as “hair-pulling and hair-chewing”; and wool sucking (or pica). Cats afflicted with psychogenic alopecia, says Dr. Dodman, “will strip their fur out, usually on the underside, along the chest, and on the inside of the hind or front legs.” This typically results in what he calls “an underneath bald cat.”

“In every case that we’ve examined,” he says, “we have been able to identify a stress trigger — something that has occurred in the cat’s life that has really upset the animal. Maybe it was the introduction of a new cat into the household … or maybe the animal’s owner has gone away for an extended period of time. In any case, cats with this disorder displace their stress and anxiety into pulling out their fur, which clearly is not functional behavior. They do this over and over again, and once they start, they don’t stop. At the very least, the cat is bound to end up looking very strange.”

Wool sucking involves the repetitive and inappropriate sucking and chewing on woolen, cotton and other materials — blankets, rugs, and so forth. “The condition resembles displaced nursing behavior and may be the feline equivalent of thumb sucking,” says Dr. Dodman. “Some cats may be weaned too early. So when they are prematurely deprived of the opportunity to suckle, they will displace that drive onto some non-edible item, such as wool.

A cat will put the material into his mouth, usually with his side teeth, and chew up and down. It looks very much like he’s nursing. But once a cat has started this nursing behavior, he may actually ingest bits of the cloth, which can lead to intestinal obstruction and other potentially dangerous physical problems.”

The danger of pica

In some cases, he points out, wool sucking can lead to pica, an even more hazardous compulsive disorder in which a cat may ingest a wide variety of inappropriate items, such as rubber bands, plastic bags and shoelaces.

Most indications of feline OCD begin to be apparent, says Dr. Dodman, after cats have entered their adolescence but before they have reached two years of age. An exception, however, is wool sucking, which is initially noticed in very young cats — perhaps three or four months of age — who have just stopped nursing. Although gender is not a risk factor for wool sucking, psychogenic alopecia is thought to be more common in female cats. Regarding genetics, he notes that oriental breeds — especially Siamese cats — are most frequently afflicted with compulsive disorders. In fact, it is believed by some researchers that Siamese cats account for more than half of the feline population affected by OCD.

According to Dr. Dodman, diagnosing wool sucking does not pose much of a challenge. “If you have a Siamese or a Siamese-cross and you’re finding torn shoelaces or sweaters with holes lying around the house,” he says, “there is no medical condition other than wool sucking that is going to be responsible. You don’t need to do a brain scan — it’s obvious.”

On the other hand, psychogenic alopecia’s characteristic hair loss may resemble clinical signs associated with other disorders. Thus, diagnosis will require an affected cat to undergo a variety of dermatologic tests to rule out such disorders as allergic dermatitis.

Treatment for feline OCD, says Dr. Dodman, involves what he terms “environmental enrichment” and, in most cases, the use of certain drugs. Regarding environmental enrichment, he says: “Make sure that the cat is well exercised. Use toys on a string, laser pointers — anything to get the cat running, jumping and cavorting. The cat should get a good cardiovascular, aerobic workout every day. And make the cat’s indoor environment as friendly and interesting as possible. Give her a high place to perch on, a window to look out of. There are all sorts of things that you can do to make her indoor life entertaining.”

The medications that are typically used for treating OCD fall into the category of “antiobsessional drugs — Prozac, Zoloft, and others,” says Dr. Dodman. “To treat a cat for compulsive behavior, an owner will have to give the animal one of these drugs for a good, long while. Some cats will respond really well, with almost complete cessation of the behavior, and it may be possible to discontinue use of the medication after a while.”

To minimize the risk of OCD, Dr. Dodman offers the following advice to cat owners: “Make sure that the animal has an enriched environment and lives the most pleasant life that an indoor cat can live. There should be no aggravations in the home between the cat and the owner’s family or between the cat and other animals. There should be a good litter box arrangement and a routine feeding schedule. You should do everything possible to ensure that your cat experiences minimal stress.” — Tom Ewing