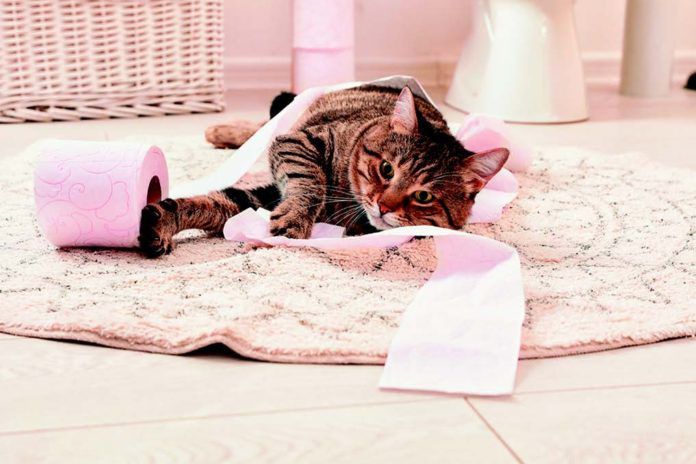 Does your cat lick or devour non-food items while displaying passionate interest in those objects? Is he eating nylon stockings or chomping down on paper towels?

The medical term for this bizarre behavior is pica. The word comes from the Latin picave, which means magpie — a bird that has notorious, indiscriminate dietary customs.

Eating non-food materials is not just weird; it’s dangerous. If indigestible items are swallowed, they can become lodged in a cat’s intestine, creating a potentially life-threatening blockage requiring a surgical fix.

“Pica symptoms should be taken seriously,” says Tufts veterinary internist Michael Stone, DVM. That’s not just because pica can lead to obstructions in the gastrointestinal tract but also because it can be a sign of an underlying medical condition. Some medical causes of pica include inflammatory bowel disease, chronic pancreatitis, and giardia. In addition to observing the pica itself, “owners should look for subtle signs of gastrointestinal upset such as flatulence, stomach gurgling, lip licking, and repetitive swallowing or drooling,” says Dr. Stone.

Getting to the root of the problem

If a cat displays pica behavior, “it is imperative that he be thoroughly evaluated by a veterinarian,” Dr. Stone advises. If a medical cause is found and treated, the pica should cease.

The Head of the Tufts Animal Behavior Clinic, Stephanie Borns-Weil, DVM, agrees, saying that “only when medical problems have been thoroughly ruled out” would she label a case of pica a behavioral problem. And she would diagnose that behavioral problem as Feline Compulsive Disorder, since pica in cats is an overwhelming and repetitive impulse.

Just as any number of medical problems can cause pica, a number of environmental reasons can cause the Feline Compulsive Disorder that manifests as pica:

Weaning that occurs too soon. Cats weaned too early may be prone to suckling-like behavior when they are older. “Once the behavior starts, it becomes self-rewarding,” Dr. Borns-Weil says.

Boredom, stress, anxiety, lack of adequate attention. “Since cats are curious and highly intelligent,” Dr. Borns-Weil says, “insufficient intellectual and physical stimulation may be instrumental in causing this behavior.”

If the pica has resulted from an underlying medical condition, your veterinarian will first explore the possibility of gastrointestinal disease or infection.

“I also address all the possible causes of social anxiety and other stresses in the home,” she says. Finally, Dr. Borns-Weil emphasizes the importance of preventing access to a cat’s preferred material to chew or lick.

If those strategies don’t do enough on their own, the doctor will prescribe either an SSRI like fluoxetine (Prozac) or a tricyclic antidepressant such as clomipramine. These prescriptions may be necessary for life, as pica can persist. She finds that high-fiber diets can be helpful, too.