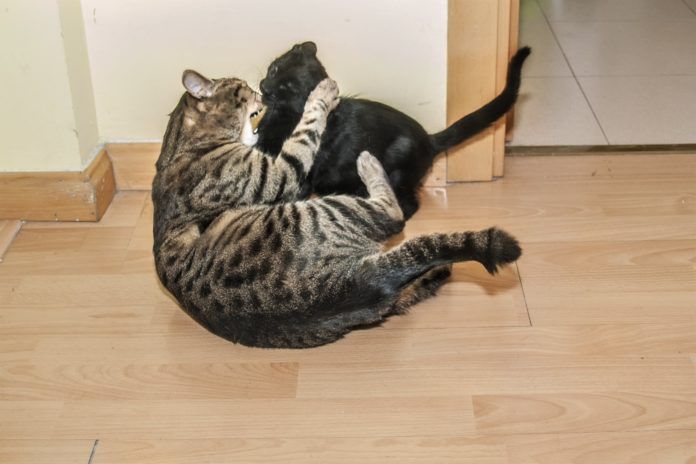 When two cats who were formerly tolerant of each other or even mutually bonded suddenly start fighting with each other, the diagnosis is almost certainly “redirected aggression.” A typical scenario, sometimes witnessed by the owner, is that two friendly cats are sitting next to each other on a windowsill, looking at the wide world outside, when all of a sudden something scary — perhaps another cat or a dog — comes into their view.

At this point, the two cats start fighting with each other in no uncertain terms. Whether what occurs is truly redirected aggression or whether it is a case of mistaken hostility as both cats engage full “affective defense” display is not absolutely clear.

So-called “redirected aggression” is what occurred between a five-year-old neutered male Sphinx called Toby and his female litter mate, Ivy. The cats’ owner was not present at the time of the supposed attack. She came home from a visit to the mall to hear Ivy “screeching” hysterically. As she entered her home, she saw Toby in a riled-up state, but Ivy was not to be seen. After a quick search, she eventually found Ivy hiding behind a couch and noticed that she had defecated, presumably out of fear.

This smart owner immediately separated Toby and Ivy to prevent further hostilities, but every time she tried to reunite her cats, Toby tried to attack Ivy so she just had to keep them separated. Ivy had been so traumatized by whatever had transpired that she hissed even when she smelled Toby’s scent on Diane’s clothing.

The cats’ owner was really thrown a curve ball by this sudden violent aggression between her two formerly peaceable cats. She wracked her brains to think what might have tipped the balance to promote their hostilities to each other. One thing that came to mind: Toby had recently been started on the cardiac medication atenolol to treat cardiomyopathy. She had read somewhere that atenolol could, however rarely, induce hallucinations and agitated states of mind in people. Might that have been a factor?

We promised to look into this possibility and took up the matter with one of our cardiologists at Cummings School of Veterinary Medicine at Tufts University — Suzanne Cunningham, DVM. Dr. Cunningham acknowledged that the benefits of treating a cat with cardiomyopathy are somewhat equivocal, and if the owner had concerns, it would not be too deleterious to withdraw this medication. We reported this to the owner and, in addition, outlined a way in which the cats could be gradually reintroduced to each other so that they could learn to trust each other once more.

The treatment plan was as follows: First, the two cats were to be kept in two separate environments and were to be switched between these environments every 24 hours to prevent territoriality from developing. The cats were to be fed two meals a day and the meals were to be fed on either side of a closed door separating the two environs in which they were enclosed. This way, they would be forced to come together at mealtimes and to tolerate each other’s close proximity. They would not be able to see each other, but they could certainly sense each other’s presence.

Once this first step was successfully accomplished, the owner was advised to advance to the next step, that is, to crack the door one inch and proceed as before. The idea in this second stage was that one cat or the other would go to the one-inch crack and be able to look at its sibling without its full body — and therefore, body postures — being visible to the other cat.

From the one-inch crack, the owner was advised to progress to a four-inch gap by putting a screen in place, and covering all of it except for a four-inch slot with newspaper. Thus, we were allowing the cats progressively greater visual access to each other. The newspaper is eventually stripped away so the cats can finally see each other, but are unable to physically interact.

After this stage, the cats were to be brought into the same room and controlled on leashes or in crates while they ate, and were to be brought progressively closer together, perhaps over some days. If peace reigns, the length of time and amount of freedom they’re granted increases and so, we hope, mutual trust and a happy relationship is re-established. To ensure the success of this program or at least to increase the likelihood of success, Toby (the aggressor) was prescribed fluoxetine (Reconcile™, Prozac™), a drug which we know decreases feline aggressiveness.

On the first follow-up 10 days later, the owner emailed to say that Ivy was still hissing a bit behind the closed door at meal times, so we told her to move the bowls farther away from the door. Toby had escaped during one of the environment-switching operations and attacked Ivy, which resulted in a minor setback.

On the positive, Toby was receiving his fluoxetine daily and was not displaying any side effects. The owner also reported that she had discontinued Toby’s atenolol and that he was somewhat calmer though still potentially aggressive to Ivy.

During subsequent follow-up phone calls, we learned that the cats’ owner was not fully compliant in the sense that as early as three weeks into the program — even though Ivy was still hissing — she allowed the cats full view of each other from behind a baby gate. She would also sometimes wrap Toby up in a blanket and bring him into the same upstairs room as Ivy, which resulted in more hissing.

By a month after the appointment, the owner reported that the hissing on either side of the baby gate had stopped. Even though Toby did escape once more, he did not attack Ivy and she licked his head for a while before suddenly becoming afraid and taking off. Subsequently, there was a mini chase, but not a fight.

Almost two months after the appointment, the owner reported that she would hold onto Toby while feeding both cats in the same room. She felt this had been going really well as Ivy was no longer hissing and voluntarily came over to where she was holding Toby. A week or so later, there had been no fights, though occasionally, Ivy would hiss.

She noted that Ivy seemed more comfortable in Toby’s presence upstairs than downstairs where the fight first took place so she decided to do some of the reintroductions downstairs, too, backing up a few steps from where she was in the upstairs reintroduction program. When the cats were together, the owner said that Ivy was beginning to tolerate a lot of licking from Toby and that she felt things were almost where she wanted them to be. The cats were still separated when she left home, but most of the time now they were together.

She did finally muster up the courage to leave them together for short and then progressively longer periods of time and eventually arrived at a point where, as far as she was concerned, the problem was resolved. It was at this point she sent us a wonderful thank-you card of the two cats sitting together by a window and nestling together in a cat basket and indicated that she thought her inter-cat aggression problem was now a thing of the past.

Redirected aggression — which is what likely started this feud — is a fairly common occurrence in cats, particularly when one or the other cat is somewhat sensitive. I witnessed this problem between my own two cats at home when they saw a rather forthright Tom cat come nosey-ing in against a fly screen one hot summer night. I heard a yowl and went to the room where they were nose to nose with the usurper, both in full affective display.

Subsequently, they redirected their aggression on each other, and I managed to break up the fight just in time by putting a physical partition between them and shooing them off into different areas of the house before closing them in overnight. The next morning, they ate next to each other, side by side on a countertop, and were back to their usual friendly selves.

This is the way it usually is with redirected aggression. If you can separate the cats immediately, the outlook is good for continued friendship. If, on the other hand, like Toby’s and Ivy’s owner, the cats are allowed to duke it out for even a short a period of time, the results of the combat are unfortunate antagonistic memories that fuel continued disputes and can progress into refractory territorial aggression — with one cat the “aggressor” and the other the “aggressee.”

Fortunately, things had not quite progressed to this extent for Ivy, whose unfortunate memories were never cemented to the point that Toby became a permanent feline non-grata. — Nicholas Dodman, BVMS