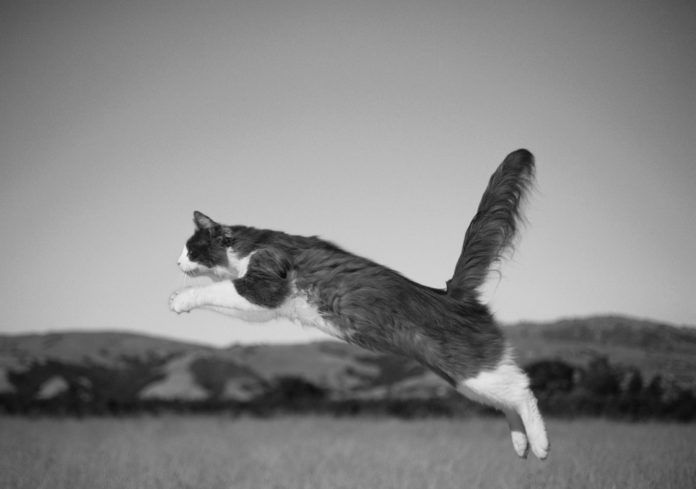 Much like Olympic gymnasts, cats sport a keen sense of orientation when twisting in mid-air. The majority of the time, they land with all four feet touching the ground, but do not always escape injury from falls.

Credit the cat’s flexible musculoskeletal system, righting reflex and a flying squirrel-like parachuting pose for enabling them to survive most falls. “The cat’s ability to land safely is the result of hundreds of thousands of years of evolution,” explains Nicholas Dodman, BVMS, veterinarian and Director of the Animal Behavior Clinic at Cummings School of Veterinary Medicine at Tufts University.

“Today’s cats are skillful gymnasts who are totally aware of where their bodies are in space, and they do not easily get disoriented. They possess strong muscles, flexible spines and great balance as well as having a relatively good power-to-weight ratio. In addition, cats lack collarbones, so their backbones are more mobile and flexible than in people or dogs, enabling them to rotate their bodies easily,” says Dr. Dodman. “Also, because they have large skin folds between their limbs and their bodies, they can catch wind much like flying squirrels do so that they stand a greater chance of surviving falls. But they are certainly not invincible.”

Cats are blessed with a remarkable righting reflex thanks to what’s known as the vestibular apparatus. This small, fluid-filled organ contains millions of sensitive hairs and is housed inside the inner ear. During movement, the fluid shifts and this dynamic change plus gravitationally-inspired movement of small particles (otoliths) stimulate the sensitive hairs, alerting the cats to which way is up and which way is down. Their bodies reflexively obey signals from the vestibular apparatus — just like an automatic pilot controls and guides an airplane.

When cats reach terminal velocity, they instinctively relax their muscles to allow for a more evenly distributed force of impact to lessen risk of injuries.

As agile as cats are, they do not always escape injury free from falls out open windows, off balconies and from rooftops. Dr. Dodman points out a study published in the Journal of the American Veterinary Medical Association that examined 132 cases of cats who had fallen out of high-rise windows. On average, these cats plummeted 5.5 stories. In total, 90 percent survived but some incurred injuries mainly to their chest, limbs and spines. Cats who fell from seven stories and above experienced fewer injuries — possibly because they achieved terminal velocity, then relaxed.

To reduce the risk of injuries to your cat, Dr. Dodman encourages you to fit windows with heavy screens and inspect the tension regularly. Provide screened-in enclosures for your indoor cat to have safe outdoor access. Never allow your cat access to roam freely on upstairs decks or unscreened balconies.

“While it is true that many cats are able to survive a fall, some do not. It is far better to take precautions to keep your curious cat safe than to have to cope with expensive veterinary care to treat serious injuries,” says Dr. Dodman.