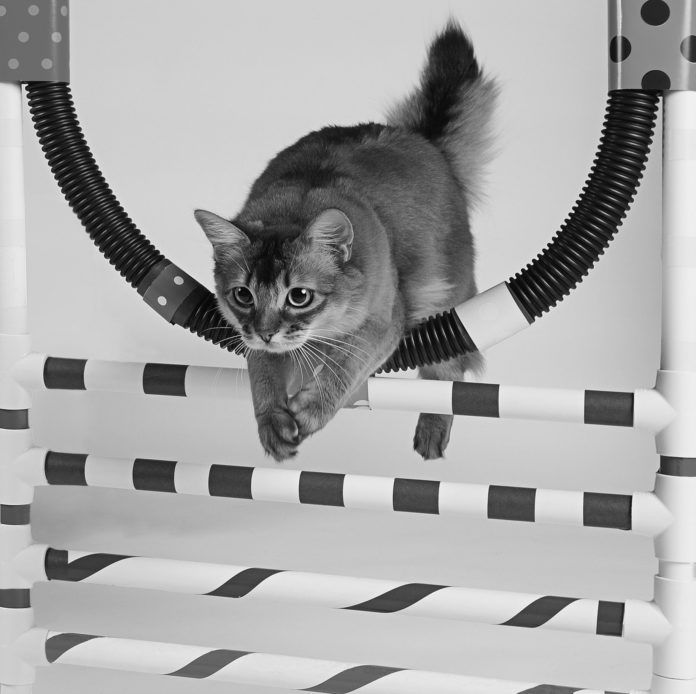 The truth is, you can herd cats. You can even get them to jump through hoops, weave around poles, climb ladders and scoot through tunnels. It’s called feline agility. “It’s the most fun I’ve had in ages — it’s a hoot,” says Jill Archibald, a retired physical education teacher who is now the Cat Fanciers’ Association (CFA) Feline Agility Coordinator. “When you learn feline agility, it really helps you to develop a good relationship with your cat.”

The event is simple and short — although that certainly doesn’t mean it’s easy. A kitten or cat enters into a fully enclosed 30-foot-square ring with the trainer. Inside are the 10 obstacles: four sets of hurdles (with 1, 2, 3 and 4 bars each, respectively), two tunnels, weave poles, a set of stairs and two hoops. The obstacles are three feet apart. The trainer leads the cat through the entire course (no touching your cat!). You have five minutes. The faster your cat finishes the complete course, the more points (see related sidebar on page 8).

Feline agility has been around since the 1990s, but it’s only the last decade that it’s taken off and become an institutional event. In the beginning, there wasn’t even a standard course. “We started showcasing CFA feline agility in 2002,” says Archibald, “with a 10 obstacle course, with specific dimensions, in a specific order. In 2005, we started scoring it, and in 2010 we started to give awards to the best cats in the country.” While it’s still a small coterie of devotees, it’s doubling or tripling every year.

“Last year, 93 cats completed the course perfectly, in 495 agility runs,” explained Archibald. Only about a third of cats who enter events actually complete the course in the five minutes on their first attempt.

What inspires a cat to jump

What motivates a cat to be so agile? It’s not food, which isn’t allowed in the cage (too distracting for the next cat if crumbs drop). Instead, trainers put a small toy at the end of a stick, and dangle that in front of the cat to entice her to — literally — go through the motions.

“You move a toy that they’re following,” says Archibald. “That‘s the lure. Cats are chasing what they think is their prey. If you are leading them with a toy, they will ignore other things.” Archibald attaches a toy with feathers, or something that looks like a mouse, or strips of sparkly Mylar, to a stick. “Sparkles of color keep their attention.”

You can try it at home (see sidebar at left for some useful tips on how to get started). Training your cat in agility helps make you pay close attention to your cat’s body language. “If your cat is twitching his ear, it means he’s distracted,” says Archibald. “If you see him doing that, move the toy so he’s following.”

In particular, she says, “Carefully watch your cat’s eyes. Cats are primarily visual. They need a direct line of site to what they are chasing.” If your cat gets “stuck” inside a tunnel, for example, she recommends dragging the lure across the top, so he can “look at the shadow.”

You can even try it out yourself at an agility show. At each competition, says Archibald, “everyone who wishes to is able to get five free minutes in the agility ring with the ringmaster for training and practice.”

The owner is asked to sit down in the middle of the ring on the rubber flooring. “Just hold the cat in your lap, stroke him. When the cat is relaxed, he’ll walk off the owner’s lap and explore the obstacles. He will circle the edges of the enclosure. He’ll explore, sniff, rub up against it, and smell the other cats that were there. When he’s comfortable, he’ll walk up to the owner with his tail in the air. He’s saying, ‘I’m bored now, let’s interact.'”

Now it’s time to get the cat going through one of the elements of the course. “Drag the toy over one of the stairs, or get the cat to go into the tunnel and go through.”

Even five minutes of running around in a ring with your cat can be strenuous, says Archibald. But anyone can compete. “You can be overweight, or handicapped, and be successful at agility,” she says. “I’ve worked with trainers in wheelchairs, on walkers, on crutches — and helped children do it as young as five or six. Anyone can do it.”

As for ideal cat candidates, Archibald says, “any cat that is motivated, and relatively athletic, can do it fast with a good handler.” — Bob Barnett