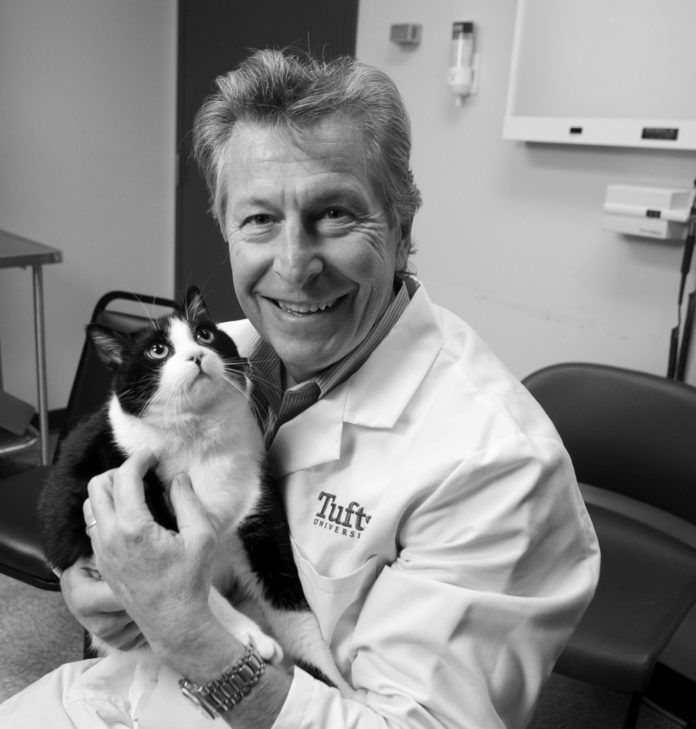 Poor Mr. P was in some state. Smokey, his neutered male cat, was spraying urine all over his beautiful home. This should not be too hard to figure out, I thought. Would that I knew what was in store.

I must say, Mr. P definitely loved his cat, but the problem was getting too much for even him to continue to handle. The back story: Smokey had been neutered at a nearby cat hospital a couple of years before in hopes of addressing this very problem. An initial short-lived decrease in spraying was followed by its resumption at fire hydrant proportions. Smokey probably sprayed about 10 times per day and wouldn’t you know it, all the “hits” were in annoyingly strategic places. Furniture, appliances, drapes, heat registers — all the usual targets. Plus, Smokey was a bit of a midnight rambler, was somewhat aggressive when handled, and was a mean mounter of cushions and peoples’ legs.

Owner documented using a video camera
Mr. P had video of everything Smokey did and would follow Smokey around with a video camera — sometimes in the dead of night — bemoaning what he saw on the soundtrack as he filmed it. It was a sad situation. In one video, he let Smokey out into the garden where Smokey sprayed the bushes with a stream of urine that seemingly never ended. Smokey was no mean sprayer. He had style and panache.

For years before coming to me for help, Mr. P spent many weekends cleaning up after Smokey, washing walls and surfaces, laundering sheets, and taking appliances apart to clean out urine that had dribbled down inside the units. He had also built Smokey the largest litter box I had ever seen:it measured 7 feet by 5 feet. Wood border surrounded it. There were steps up to it and inside, scoopable litter one foot deep. Mr. P immaculately cleaned the litter box.

Nothing Mr. P did made any impression on Smokey’s problem, however. He was, when I saw him, at the end of his tether. No problem, I thought, as I embarked on trying to quench Smokey’s fire and help Mr. P regain his sanity. Numerous other veterinarians had weighed in on Smokey’s problem before I became involved. I double checked their work from the voluminous records that Mr. P brought with him and found all was in order.

testosterone test to make sure Smokey was not harboring a retained testicle. The latter test showed that Smokey’s male hormone level was very low, in the range you would expect for a neutered cat. I rolled up my sleeves and went to work.

Remedy called for three steps
My three-pronged attack was the same as usual for a problem of this nature.

Concerning Step 1, there was little I could find that might be ticking Smokey off, though he was not always super friendly to another feline housemate. I advised making sure good things happened when the two cats were close (counter conditioning) in an attempt to address this problem. Then I prescribed fluoxetine (by mouth) once daily. Finally, I told Mr. P to use a black light to locate all urine-marked areas and to treat them with Zero Odor spray. All went well for a while. Smokey definitely had his jets cooled, but just like in one of those stereotypic horror movies, Smokey broke through the fluoxetine masking. What now, I thought.

Long story short, I tried a number of other B-level strategies, but none really helped much with Smokey’s problem. Eventually, with the long suffering Mr. P about to give up, I revisited Smokey’s entire medical history and found a salient comment buried in one veterinarian’s report that made all the difference. He said Smokey had “barbs” on his penis. That only occurs with a full, red-blooded male. His veterinarian claimed that two testicles were removed at the time of his neuter surgery, plus low testosterone level threw me off initially.

Because of the presence of barbs, I decided to conduct a tie-breaker test, a gonadotrophin releasing hormone (GnRH) challenge. In this test, GnRh is administered to the cat and testosterone is measured afterwards. If it spikes, a testicle is present (despite whatever anyone claims).

Mr. P dutifully brought Smokey for his test and we all waited for the results. They were positive! A testicle was there. Now cats never have three, so someone missed the ball (if you’ll excuse the pun). Next stop, surgery performed by Rob McCarthy, DVM at Cummings who “never had a testicle he couldn’t find.” Of course, he found one nestling within the inguinal canal (in the groin area) and shucked it out. With the offending object removed, Smokey never looked back. Sure, the effects of castration were not immediate — they often aren’t — but Smokey continued to improve over time in all aspects of his objectionable behaviors.

After the fact, we questioned why the testosterone level was so low initially despite the lurking testicle. The best answer we could come up with was that hormone levels in cats vary according to the mating season. We also wondered why the original veterinary office had been so adamant that they had removed two testicles. We figure they got the records mixed up. That’s easy to do when you see many patients.

Anyway, Smokey’s problem was finally resolved — $10,000 later, according to Mr. P — and Smokey lived to tell the tale. He was lucky to have such a long-suffering owner who was prepared to make so many personal and financial sacrifices.

Hindsight being 20/20, we should have combed through the records more thoroughly earlier because the fact that there were barbs on Smokey’s penis was the “smoking gun” that could have shaved time and money off the final phase of Smokey’s long battle against the odds.