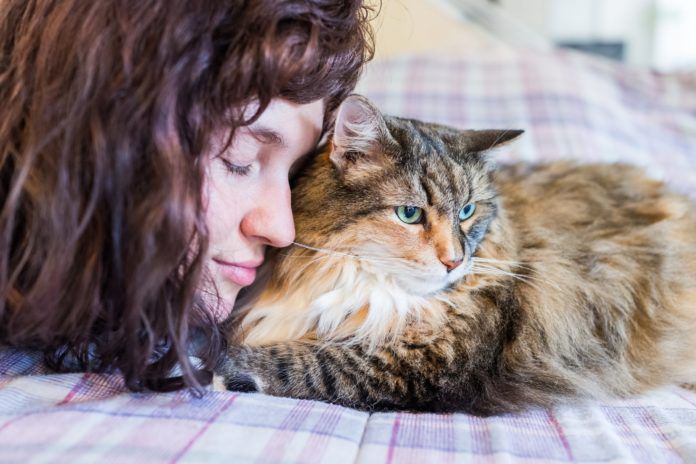 The statistics speak for themselves. Over seventy percent of pet-owning women who find safety in a women’s shelter report that their abuser had also “injured, maimed, killed or threatened family pets for revenge or to gain psychological control.” Furthermore, 32 percent of the children who end up in shelters to escape domestic abuse had themselves harmed or even killed pet animals; the lessons modeled by the offending adult seep in insidiously.

The numbers were compiled by the American Humane Association in conjunction with the National Coalition Against Domestic Violence. But they represent only those who make it to safety. As many as 40 percent of battered women do not leave their abuser out of fear of what might happen to their cat, other pets or livestock once they have gone.

Indeed, the many elements that can make it difficult to escape an abusive relationship become even harder if there is a cat involved who has served as a source of comfort and has also been a target of abuse. No one wants to escape while leaving a four-legged loved one behind. Logistic challenges hinder efforts to get away, too.

Those battered may very much want to take the cat with them, but often assume they won’t be allowed sanctuary if they bring their pet. Or they feel that keeping their pet in a separate safe haven for a while is not an option. Making the situation more desperate still is that abusers frequently up the ante specifically by threatening to harm a cherished cat.

The pet as hostage

“We hear from many victims who share that their partners have threatened to shoot their pets if the victim leaves,” says National Domestic Violence Hotline Chief Communications Officer Cameka Crawford. “Because so many victims have strong emotional bonds with their pets, especially if they have been isolated by their abusive partner, they often express hesitation about leaving their pets behind.”

Their fear is born of all-too-real experience. Of the women who report abuse of their pets by an intimate partner, nine in 10 of them report having personally witnessed the abuse, as have 75 percent of children from such homes. The abuse is designed to “psychologically control and coerce them,” says the American Humane Association on its website (americanhumane.org).

Some victims who do find the wherewithal to leave are so inextricably (and understandably) bound by comfort and shared abuse with their cat that they “have been known to live in their cars with their pets for as long as four months until an opening was available at a pet-friendly safe house,” the association reports.

Getting help is made harder by the tendency to conceal abuse. Victims will sooner admit to their pet’s abuse than their own. But therein lies a sad truth that, ironically, a beloved cat can become a light in a tunnel, so to speak. Often enough, an ongoing domestic abuse situation is uncovered during an investigation of an animal cruelty tip, according to the California-based Animal Legal Defense Fund. That is, checking into the abuse of a cat can also end up saving an abused person.

Fortunately, legislators are stepping up to address the issue of cats and other animals who get caught up in dangerous domestic situations, affording protection to both abused pets and the people who love them and don’t want them to leave them behind or get them caught up in their personal melee.

Maine became the first state to enact a statute addressing the issue back in 2006 with its Domestic Abuse Animal Protection Act. The law essentially allows judges to include pets in domestic violence protection orders, meaning it is illegal for an abuser to take revenge on a pet. New York soon followed suit and to date, some 30 states have enacted similar legislation.

That’s a great help, but the question of where to go for safety without having to give up your cat is paramount. Solutions for that, too, are growing.

The Humane Society of the United States has on its site a Directory of Safe Havens for Animals Programs with a list of shelters that will board pets of women fleeing domestic violence. There are also listings of shelters that take people but are pet-friendly, meaning that they will allow residents to keep their pets with them. But you’re not necessarily out of luck if you don’t see a program listed for your area. The Humane Society notes that “if you don’t see a program listed in your area, contact your local domestic violence shelter, animal shelter, veterinarian or boarding kennel to see if they have a safe-haven-for-animals program or can provide temporary care for your pet.”

One of the many animal shelters listed on the directory is the Santa Ynez Valley Humane Society in Buelton, California. It does not typically get calls requesting a safe haven for a cat or other pet, says executive director Seth Hutson. But a system is in place to provide needed help. Mr. Hutson says the facility “would gladly board the pet without hesitation until the victim could figure out what to do,” most likely waiving the fee outright or at least providing a steep discount.

“We would take the pet, let the victim take a few days to breathe — we know that it is a very courageous thing to leave — and after a few days of collecting her thoughts, she can come and discuss the short- and long-term needs of her pet. Paperwork can always be resolved later, but the immediate thing is to get the pet in here so the woman can be removed from that dangerous situation.”

If the cat is what is referred to as a “red zone” cat, meaning that the pet has special medical needs, the shelter would transfer it to the county, which is better equipped to provide appropriate care, says Mr. Hutson.

Along with helping victims of abuse directly, the ARK Shelter in Brownwood, Texas regularly provides educational materials at public events, to EMTs, law enforcement, doctors and nurses, and anyone who might be on the front lines of domestic violence situations, right down to the small child who leaves an event with a free pencil embossed with the shelter’s name and contact number.

It’s not just soft PR. The ARK would like to see awareness of the link between domestic violence and violence toward pets become more commonplace — and thereby, less acceptable in the public eye. A good example is what Mothers Against Drunk Driving (MADD) did to change the perception of driving while intoxicated. Juries once didn’t tend to convict drunk drivers because they were “members of the community,” perhaps otherwise “upstanding citizens.” Now they do. Drunk driving is a recognized offense understood to have potentially serious, even deadly, consequences involving innocent people.

The public should also understand that while the first image that comes to mind when hearing about domestic violence is a girlfriend or wife, there are many types of victims. For example, pet-friendly shelters may take in seniors whose drug-addicted grandchildren have taken over the home, becoming violent when they can’t have the car or social security check, or members of the LGBTQ community who have met with violence, including violence at home; and so on.— Constance Lindner

Helpful Resources for People and Their Pets

Whether you’re a victim of domestic abuse who needs to escape with a cat, or suspect that someone you know is a victim, you might feel paralyzed by the thought that there’s nowhere to turn. There is. And knowing what to do can make all the difference for victims of domestic abuse who are reluctant to leave because of fears for their pet’s safety.

For starters, the nonprofit Animal Legal Defense Fund suggests contacting your local sheriff or police by dialing 911 if you witness animal cruelty. You can also contact your local humane society, animal control officer or SPCA. There are also a number of other resources available for those reluctant to leave an abusive situation due to their fear of leaving behind a pet behind or leave one in a shelter.

The Animal Welfare Institute actively pursues partnerships with other organizations to offer resources, programs and policies that address the important relationship between animal cruelty and family violence. (awionline.org/content/animals-family-violence)

Animal Welfare Institute’s Safe Havens Mapping Project allows you to enter a zip code to find entities near you that provide sheltering services for companion animals of domestic violence victims, have a relationship with an entity that does or provide referrals to such facilities. (awionline.org/content/safe-havens-mapping-project-pets-domestic-violence-victims)

RedRover offers financial assistance for victims of domestic violence and their pets through our Safe Escape grant program. The goal of the program is to help families with pets safely escape domestic violence together. Funding is mainly provided to help with the cost of temporary pet boarding while a client is in a domestic violence shelter, though other costs, like urgent veterinary care, can be considered. (redrover.org/domestic-violence-safe-escape-grants)

Sheltering Animals of Abuse Victims (SAAV) is an all-volunteer organization that plays a unique role by recognizing the importance of animals as vital family members and arranging for their safe harbor at a time of critical need — when a domestic abuse victim seeks refuge from an abuser. (www.saavprogram.org/)

Atlanta-based Ahimsa House offers a list of programs throughout the country for victims of domestic violence looking for help for themselves and their pets. (ahimsahouse.org/?s=safe+havens+directory)

Sheltering Animals & Families Together (SAF-T)™ is a global initiative guiding domestic violence shelters on how to house families together with their pets. The organization “recognizes the human-animal bond and that family pets can provide comfort, reassurance and healing to adult and child survivors.” (alliephillips.com/saf-tprogram/)