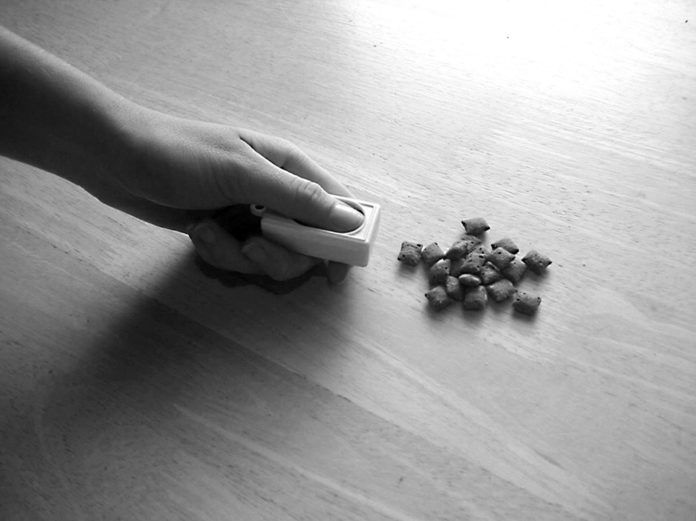 Most people — including many cat owners — think it’s impossible to train a cat. While cats are certainly more challenging to train than dogs, they are trainable — especially using a method called clicker training.

First popularized in the 1990’s by dolphin trainer Karen Pryor, clicker training works by use of what behaviorists call “operant conditioning.” Animals initially learn to associate the sound of a metal clicker with a reward, and can eventually be taught all kinds of tricks and behaviors with the clicker alone.

Cats are good subjects for clicker training, and most can quickly learn to associate the clicker with a food treat or praise. Once this association has been established, a cat can learn a variety of actions and behaviors.

“Cats can be taught all sorts of behaviors via clicker training,” explains Nicole Cottam, MS, behavior service coordinator for Cummings School of Veterinary Medicine at Tufts University. “Our imaginations may be the only limit to the types of behaviors that can be captured with a click and then rewarded. For example, cats can be trained to turn off a wall light switch. They can even be trained to run cat-sized agility courses. However, most people start with a more basic ‘sit’ or a ‘high five’ paw slap.”

Additionally, clicker training can be ideal for strengthening the bond between the cat and teacher, and also for helping cats feel more secure and reducing stress, according to Marilyn Krieger, certified cat behavior consultant and author of Naughty No More: Change Unwanted Behaviors Through Positive Reinforcement. “It is also mentally stimulating for cats, and when done correctly, it’s fun for both the cat and her trainer,” says Ms. Krieger.

Krieger notes that in addition to tricks such as shaking hands, sitting, rolling over and jumping through hoops, clicker training is very effective for helping change a number of unwanted behaviors — including furniture scratching, door darting, counter surfing, some aggressions and many others.

“It’s also a very useful and effective tool to use when introducing cats to each other,” she says. “When training cats to do tricks, however, it’s important to remember to train behaviors that are not stressful for the cat. Rolling over is an example of a behavior that is not stressful. Cats normally flop down and roll over. The next step is to use clicker training to train the cat to roll over when cued.”

Cottam points out that while many consider cats unwilling to work for humans, they too are subject to the laws of operant and classical conditioning, on which clicker training is based. “The trick is finding something that is enjoyable enough to the cat that he or she will offer a behavior in order to receive ‘the goods,'” she says.

Finding a motivator
Food is often the reward of choice, and many cats can be coaxed into participating in a clicker training session with something delicious, like some tuna flakes or bits of cooked chicken. (Just be sure to include these treats in your cat’s overall diet profile, or she can end up being well-trained and a lot chubbier.)

“Skipping a wet food meal or picking up the bowl of kibble that is left out for buffet-style feeding might be necessary first to increase a cat’s motivation to participate,” says Cottam. “However, once a cat experiences the fun of a clicker training session, these tactics usually aren’t necessary.”

A short play session or even petting can be used as a reward. “The click sound used in clicker training merely makes the association between a cats’ behavior and the reward more obvious to the cat,” says Cottam. “Thus the click hastens the learning process for the cat. It helps the cat understand what he or she did that is deserving of reward.”

Once a cat understands what he did that resulted in a treat or petting, he will be very likely to perform that behavior again in order to receive more rewards. The click sound is later dropped out of the training sequence because it is no longer necessary to teach that behavior.

Using the Clicker
To clicker train your cat, you first need to find out what motivates him the most. An inexpensive mechanical clicker (available at pet supply stores or online) provides the sound your cat will come to associate with the reward.

To teach your cat to perform a desired behavior, use the clicker to let him know when he’s doing what you want. “The next step is to capture a behavior, such as ‘sit,'” says Cottam.

To do this, wait for your cat to sit naturally without directing him in any way. “It might take a while, but your cat will sit eventually,” explains Cottam. “Then, spring into action.” Just as the cat’s hind end hits the floor, click the clicker and give a treat, tossing it so the cat has to get up and walk over to the treat to eat it. Then wait for the cat to sit again and repeat the sequence.

“With a few repetitions, most cats learn that it is the act of sitting that made the click (and thus the food) happen, and they will sit again quickly after eating the treat,” says Cottam. The last step is adding in the cue word ‘sit.’

“Quickly say the word ‘sit’ before the cat happens to sit on the next round,” she says. “This last association — ‘if I sit when my owner says sit, that sound happens and I get food’ — will also take a few repetitions to learn.”

Using this same method, you can teach your cat to perform a number of behaviors. For instance, Cottam used clicker training to teach her shy cat to be more interactive with her. “The first behavior I taught my cat Peter was to make direct eye contact with me,” she says. “Peter is a stray cat and was not very friendly. He spent a lot of time hiding in my home when I first adopted him, so teaching him to voluntarily make eye contact with me when I said ‘watch me’ was important.”

Because clicker training is all about positive reinforcement, it is an effective way to influence behavior. “Engaging in clicker training is one way to enrich a cat’s environment,” says Cottam. “It forces them to participate in problem solving. This burns some mental energy and can result in cats spending less time engaging in bad behaviors.” — Audrey Pavia