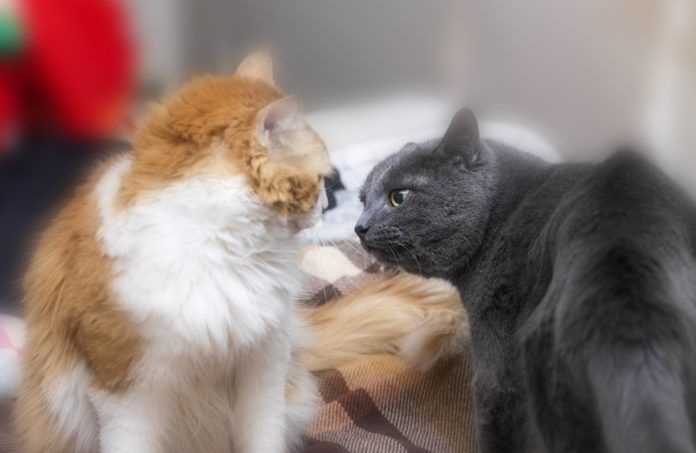 Q: I would like to know if you can provide some specific information regarding Feline Hyperesthesia Syndrome. I have a cat affected with this and most of what I’ve read is redundant.

I am curious about the best way to introduce a new cat into the home when you have a resident cat that suffers from FHS. My female has not been able to accept a new cat — no matter how long the introduction period. She runs and, of course, the new cat will always pursue her. I understand the behavior of cats, but is there a way to make it less stressful on my resident cat so she can stand her ground and one day be able to share our home with others?

A: Dear Cher, I believe that FHS is a condition that stems from partial seizures in the cat’s brain. Consciousness is not lost, but hallucinations seem to occur with cats running wildly from an unseen enemy or ducking some invisible flying object.

Cardinal signs are dilated pupils, skin rippling and frenetic self-grooming along the spine or base of the tail. Some affected cats swish their tail angrily and may chase or even attack it — and you’d better watch out when attempting to pick up a cat in such a state or you may wind up the target of some redirected aggression.

Treatment with an anticonvulsant or a Prozac-like drug is often highly successful. (Note that Prozac has some anticonvulsant properties of its own as well as being a mood stabilizer.) The other problem you report may have nothing to do with your cat’s FHS — but treating the FHS properly might be a good start. More likely, it is a territorial feud or sexual aggression.

Territorial aggression is not easy to fix, but the usual approach is separation and reintroduction, as you have tried. But you have to do it just right — and backsliding at times is almost inevitable. Also, anti-aggressive medication for the aggressor can really help move things along. Sexual aggression involves a male cat — neutered or not — chasing and jumping on a reluctant female, possibly biting her in the neck. That’s typical male sexual behavior in cats. I have successfully fixed this problem in many patients with the use of male pheromones.

Hogmate is a pheromonal product that works well (it can be purchased from various sites online). It should not be applied directly, but rather squirted onto a cloth and lightly rubbed on the female’s rump every other day. The next time he goes to charge at her, he will find himself to be olfactorily confused — and hopefully will break off his amorous endeavor.

I would have your veterinarian weigh in on whether the inter-cat issues are territorial or sexually motivated, and also on any treatments you might be thinking of embarking upon.

Q: I am curious about your opinion of self-cleaning litter boxes. I am 70 years old, living alone on a fixed income, with three indoor cats. I would appreciate some assistance with taking care of their bathroom needs, but so far I have not been able to train them to use the human toilet and am about to give up on that idea.

Is a self-cleaning litter box something that could make this daily chore easier for me? If so, do you have any suggestions on the type to choose? Thanks in advance.

A: Dear Janice, Ideally for three cats you need four litter boxes (the formula is N+1 where N is the number of cats in the household). To get four self-cleaning boxes would be expensive, but could work. Maybe you could compromise and get two self-cleaning boxes and two regular boxes. But remember: You still have to clean the self-cleaning box once in a while because the accumulating detritus in the bin will begin to smell.

The bottom line is that I do like self-cleaning boxes (Littermaid is as good as any), but what I think about them is less important than what the cats think. Most cats will use self-cleaning boxes with no problem, but the odd scaredy cat might take exception — and, unless there’s a second choice, that could be the beginning of a problem.

Mechanical boxes aside, all your cats really need are four regular litterboxes, well-spaced apart, and unscented scoopable litter (scooped clean daily). They will be very happy with that situation.

Toilet training can be accomplished, but it runs against the flow of nature, so to speak. Toilet-trained cats always have a tendency to revert to a more natural elimination pattern (urinating on a sand-like substrate) by a process known as instinctual drift. I am glad you have decided to “bag” that idea and I know your cats will be happy about that decision, too.