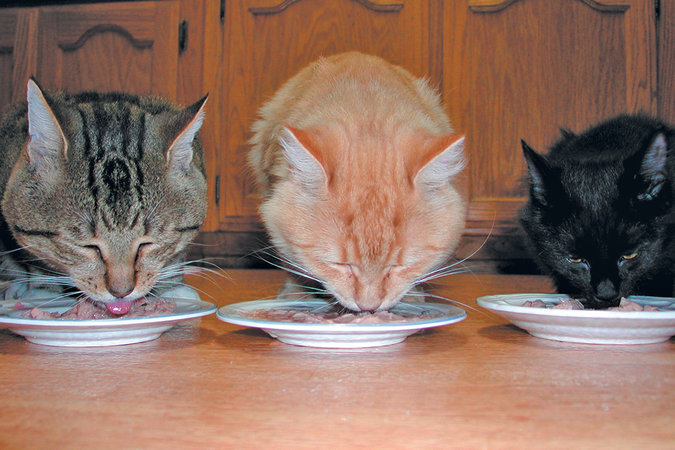 Humans do it — eat to be polite, to join in with others, rather than because they are hungry. And dogs most certainly will want in on the action if they see another dog eating, whether or not the sight or aroma of the food itself has enticed them. But what about cats? Do they eat to experience social connectedness?

It can certainly look like felines decide to eat for social reasons. If you live in a multi-cat household, you might frequently see what looks like signs of it. You put down the food, and all the cats come running over. Or one cat starts eating out of a bowl that has some food left in it, and the other cats go over to their own bowls to do the same. Or all the cats tend to eat out of the same bowl even though there’s a bowl for each of them. One Catnip reader even describes cats at a shelter where she volunteers who won’t eat unless a person sits with them.

But the head of the Tufts Animal Behavior Clinic, Stephanie Borns-Weil, DVM, has doubts that eating is socially facilitated, that is, triggered by the sight of cats in their social group eating with others to signal a social bond, to be in. That is not to say that cats do not learn from other cats. In research conducted in the mid 1940s, Dr. Borns-Weil says, “cats were shown to be observational learners. Investigators found that access to a common feeding station in feral cat colonies was regulated hierarchically, with the most dominant cat eating first. But that’s very different from social eating,” she says. “It is more like social waiting your turn.” When house cats all go for the same bowl even though there are plenty of food bowls down, it might simply signify that “once a cat’s attention is called to food, he goes to where the food smells and sounds are coming from,” she adds.

In a related vein, Dr. Borns-Weil comments that when all the cats come over as food is put into their bowls, it might just mean they’re hungry rather than interested in eating with each other. And when one cat starts eating in a food bowl that is always out and the other cats start doing the same, it could just be that the sound or smells associated with eating stimulate the cat to think of food.

As for cats in a shelter who won’t eat unless a person sits with them, Dr. Borns-Weil notes that “insecure cats may benefit from the presence of a person in a frightening or stressful environment.”

The bottom line: “Cats are solitary hunters,” as the doctor puts it. “Social eating among them is highly unlikely.”