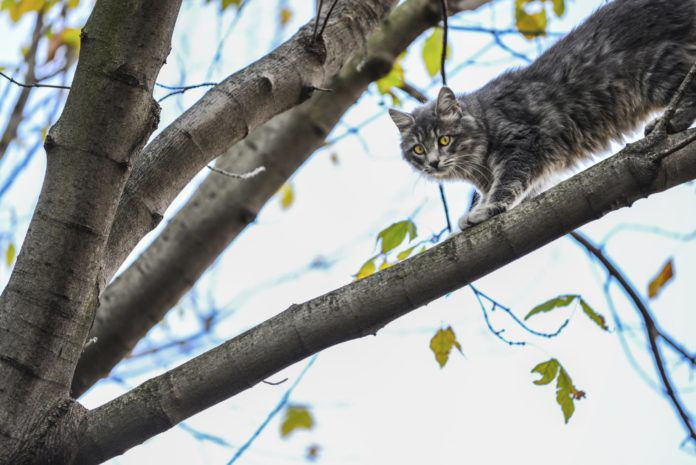 Cat Vs. Bird Debate Lives On

A team of researchers at the NC Museum of Natural Sciences and NC State University has launched an ambitious effort to analyze the secret lives of outdoor cats with the help of tiny satellite tracking harnesses, a 3-D printer and daily feces analysis. This could eventually include miniature cat-mounted video cameras to detail behavior of outdoor cats.

“We view cats through the lens of how we see them culturally, but seldom do we view their actual behavior,” explains biologist Rob Dunn. “We want to change that.” Dr. Dunn is an associate professor in biology at NCSU. Also involved in the project are several researchers from the Earth Observation and Biodiversity Lab at the Museum of Natural Sciences and from the NCSU veterinary school.

Called the Cat Tracker project, it is already following dozens of cats fitted with GPS devices. Down the road, the scientists are hoping to persuade cat owners to enroll more than 1,000 felines. This would allow the project to collect vast amounts of data on cat behavior, emphasized Troi Perkins, a zoology and fisheries science student at NCSU who is involved with the project.

Whether you love cats or hate them, their behavior has important implications, according to Dr. Dunn. They may — or may not —kill significant numbers of birds and other wild animals, and wander in ways that could affect the spread of microbes.

In fact, the research was started in response to a 2012 study that contended outdoor cats kill between 1.4 million and 3.7 million birds annually, and 6.9 million to 20.7 million small mammals. Many experts feel that the numbers of bird and animal deaths in the 2012 study are not accurate, and this group of researchers felt it was important to delve deeper into the subject.

That study and others have led to bitter arguments between cat lovers and bird advocates. Researchers feel that data about cat roaming patterns and feces analysis should yield more information about the real impact of cats on wildlife, according to Perkins.

Perkins is responsible for fitting local cats with GPS harnesses, then retrieving the instruments and downloading the data. The tracks of each cat — which are listed under a cat alias to protect the privacy of the owners — are posted on the Cat Tracker website and also on www.movebank.org, an international website that collects tracking information on thousands of animals of different species all over the world. The feces collection and analysis part of the project is voluntary — cat owners can sign up for just the GPS tracking.

According to data on the website, it is clear that many cats actually do have interesting and unexpected behavior. Dr. Dunn’s own cat, Chicha, mainly stayed within a few blocks of home but took one much longer jaunt, traveling back to the family’s previous home about a mile away. “We would have thought she would never leave our backyard,” he said. “She’s old, and all her parts don’t work well, but she walked back all that distance, which suggests cats are doing all these things we don’t know about.”

Another interesting case involved two cats, Oatmeal and Tiger, who were from different litters but adopted at the same time into a Durham, NC home. Tiger, the male, stayed close to home, while Oatmeal, a female, wandered extensively. Ultimately, the scientists want to add video because that could add significantly to the understanding of the data. For now, they know where a cat goes — but not why.

According to Perkins, first they must work through various legal, ethical and practical issues. For instance, detractors fear that cameras would turn cats into small ground-level drones, sneaking around private property and potentially catching people unexpectedly on camera. But researchers feel that they can solve those things, and have already done limited testing on one cat already.

What really caught the scientists’ attention was that the cat went on a particularly long jaunt just to meet up with another cat — and apparently not for mating or rivalry. “There was no fighting or anything, they kind of stood around, sunbathed a little, and then the cat just came home,” explained Perkins. “We’re hoping to find out more about whether cats are cosmically inclined to other cats outside. Do they have little cat games, or group buddies, or maybe they’re just solo creatures out there.”

The scientists are particularly interested in developing solid data on cats’ reasons for moving around, whether it’s to hunt, to receive a free meal at a friendly neighbor’s house or to spend time with other cats. And the case of Oatmeal and Tiger raises the question of whether gender might affect roaming as well, according to Perkins.

There are also good reasons for not roaming. For example, early data suggest that cats don’t wander into the woods as much in areas populated with coyotes. The scientists are also eager to enroll cats in as many places as possible, in order to help them probe differences between cats in different climates, and factors like seasonal patterns, or urban and rural differences in roaming. “Ideally, we will be able to build this global picture of cats,” said Dr. Dunn.