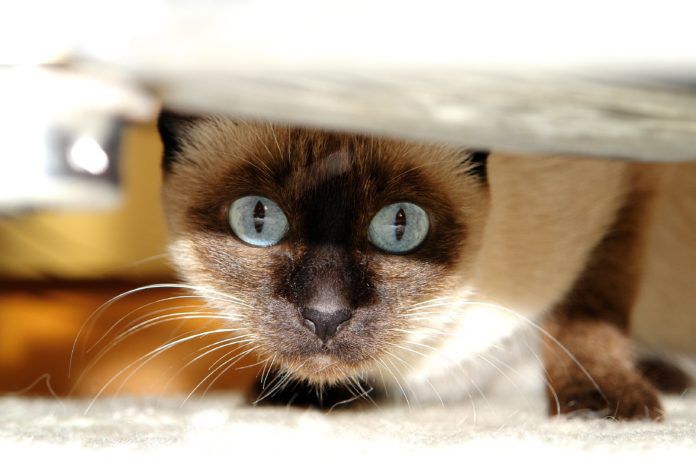 A cat who disappears whenever guests come over

Q We have a two-year-old Siamese mix who we took in as a stray. All of our cats run and hide if the doorbell rings or we have visitors, but Winston is the worst. Recently when our son, wife and grandson came for an overnight visit, Winston dashed outside and would not come back in.

We were finally able to usher him inside the garage, but he would not come into the house until several hours after our family members left. Is there any way we can get him to be more willing to accept house guests? Our other cats hide at first, but then act normal within a few minutes of guests’ arrival.

A Dear Marie and Fred: The sensitive period for learning in cats is during the first seven weeks of life. Cats who are not exposed to people in a positive way during that period of time (for example, feral cats) are never really good with people though they can develop some reasonable bonds with some familiar individuals.

Basically, some cats miss the window of opportunity early in life for critical social learning. You wind up with a cat who is, at best, somewhat anti-social and, at worst, positively fearful of strangers. That seems to be your situation with Winston and I have witnessed it before. Winston is the worst of your gang and appears to be something of a feline misanthrope who would rather hide away than face strangers.

The way to improve the situation is to attempt to show Winston and the others that strangers are not only innocuous — but also a signal of good things to come, such as delicious food. To achieve this, it is very important to make sure that Winston and the others are not able to escape from the house during visits by friends or family while also instructing visitors not to encroach on him in any way. Basically, they should ignore him, not look at him, not talk to him, not pet him — and certainly not attempt to put him on their laps.

Next, highly aromatic and delicious food — like canned tuna — can be added to the equation. The opening of a can will provide an auditory signal to Winston that a delicious dinner is about to be served. The serving may initially have to be closer to Winston than to the visitors but, as time goes by or during subsequent visits, the food can be presented closer to the guests.

Finally, to speed up this process, it is possible to alleviate some cats’ anxieties with the mild anxiolytic medication called buspirone. Under the influence of this medication, even feral cats become less shy and more social and thus more easily coaxed out of their shell (so to speak). If you would like to try this, you should speak to your veterinarian as buspirone is a prescription medicine.

Q I have two cats, both about five years old now. Lucy is a Siamese. The other cat, Ethel, tends to be somewhat sensitive and/or needy, which I attribute to her being adopted as the second cat. Three times in the past month, Ethel has peed and pooped on my bed. I suspect this is behavioral, but I cannot figure it out.

I have two litter boxes that I scoop daily and fill with the World’s Best Cat Litter brand. Ethel receives one sachet of FortiFlora mixed into her dinner to combat watery, odorous stools.

I suspect Ethel is jealous of the attention I give Lucy, but I try to give equal attention to both. Do you have any suggestions of what I can do to break Ethel of this nasty trend? I plan to take her to the veterinarian to rule out any possible medical causes. I want to solve this as she has twice nearly ruined a brand-new and expensive mattress.

A Dear Valerie: The behavior you report is almost certainly “marking behavior” and has nothing to do with the litter box arrangements in your house. The location of urine marking often gives a clue as to the cat’s concern, and in this case, since it is on your bed, the object of your cat’s concern is you!

My guess is that the guilty party, Ethel, has issues with your interactions with Lucy, and I think your suggestion that Ethel is somewhat jealous of attention given to Lucy is probably quite accurate. Ethel, I believe, is urine marking on your bed to send a signal to Lucy that you and the place where you lie belong to her. Although marking with urine and feces seems disgusting to us, it is quite natural for most animal species. Fecal marking in cats is called “middening” and often occurs on a bed or chair on which a favored person sits.

The correct behavioral treatment would be to pay Ethel more attention and not try so hard to interact with the relatively aloof Lucy. Your veterinarian will almost certainly find no medical cause for this behavior, but would probably know that marking behavior can be eliminated in almost all cases by a few months’ treatment with Prozac.

Care for a deaf cat

Q Last summer, our veterinarian asked if we would be willing to adopt another cat, a two-month-old kitten, who had been struck and injured by a car as she was dashing across a street. A good Samaritan had rescued her and took her to our veterinarian for treatment. We brought her home a month later after she completely recovered from the injuries, was spayed and received all her necessary vaccinations. We named her Chloe.

In interacting with her, we noticed that she did not seem to respond to any voice commands. At first, we thought her lack of response was attributed to the lingering trauma from the car accident and that she would gradually gain confidence and respond.

Steadily, she warmed up to us and loves being petted and cuddled, but there was still no response from her to our voices.

It suddenly occurred to us that this cat could to be deaf. We brought her into our veterinarian to have her ears examined and no apparent defect or injury to the ears could be detected.

She seems to have limited hearing. She responds to loud, clanging noises or door bell rings or if I shout at her. But if we speak in normal tones, she acts totally deaf and is unresponsive. She watches body language and obeys by watching and observing, and has become a good little cat.

We have three other cats, two of which are neutered brothers who are three years old, and a two-year-old spayed female. They have accepted her and she delights in their company, but we worry that she misses out on so much due to her apparent deafness. All are inside cats who enjoy an hour of supervised play outside each day. We keep Chloe inside to keep her safe because of her lack of hearing.

Are there any new medical treatments for this type of deafness in cats? Is it possible for a young cat to regain the ability to hear more clearly? Any advice you can offer will be greatly appreciated.

A Dear V. Bradish: Deafness in cats is not uncommon. A recent study revealed that 20 percent of purebred white cats are deaf in one or both ears.

Unfortunately, there are no well-accepted treatments for deafness in cats. Traditional hearing aids may not be satisfactory due to a number of factors, including the different types of deafness in cats (versus humans) and the low tolerance of cats to wearing ear inserts. A hearing test called a brainstem auditory evoked response test should be performed to determine the type of deafness Chloe is exhibiting. A surgically placed cochlear implant would likely be effective for the type of deafness most cats have; however, cochlear implants have not yet been developed for cats.

For the vast majority of owners, my recommendation for living with a deaf cat includes trying not to startle the cat (for example, by stomping on the floor when approaching) and not allowing unsupervised outdoor activity. Luckily, most deaf cats live long and happy lives.