Q. I just read that a group of cats is called a clowder. Where does that term come from?

A. “Clowder” is an early 19th-century variant of the word “clutter,” which comes from the Old English word “clott,” meaning lump. If you think that doesn’t sound so good, consider that a group of cats can also be called a glaring.

Don’t feel too bad. A group of crows is called a murder, while a group of hippopotami is referred to as a bloat and a group of rhinoceroses, a crash. A group of ravens is an unkindness. 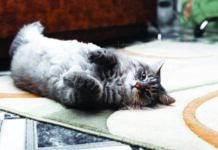